On 23 February, during the 68th International Film Festival in Berlin, the world premiere of the film ‘Mug’ by Małgorzata Szumowska took place.

Before the premiere of the film, journalists had the chance to meet its creators, namely, the director and screenwriter Małgorzata Szumowska, the co-writer of the script and cinematographer Michał Englert, actresses Małgorzata Gorol and Agnieszka Podsiadlik, the lead actor Mateusz Kościukiewicz, and the make-up artist Waldemar Pokromski. Moderator during the meeting was Nikolaj Nikitin, a Berlinale selector.

“We decided to work together once again and at a very early stage we started to think about how our movie should look (…). Visually, the film refers to the Polish landscape, but also to Polish art from the Romantic period. We wanted to create an image that would look like a sort of fable. Something that would not only look extremely realistic, but would also be a metaphor of modern-day Poland, though not only of Poland because we talk about something that is happening now all over the world. We did not want to make a heavy, journalistic-style film. We wanted to create a metaphor, but with a certain ironic look, which is why we chose such a specific way of filming” – said Małgorzata Szumowska at the beginning of the conference, when asked by one of the journalists about the idea behind ‘Mug’. “The film talks about identity, its loss and related problems (…). Today, it is very difficult to find the right balance, and it is difficult for society to find its own reflection in the mirror,” the director continued. “For me, this film is not a metaphor for events related to Poland in 1989, but it’s a metaphorical story about what is happening in Poland right now,” she added.

“This time, we tried to work in a completely different way. The theme of the film is how we see the world and how it perceives us. This led us to use a very subjective perspective, which connects us with the main character in a very specific way,” stated the cinematographer and co-writer Michał Englert.

The conference moderator asked Mateusz Kościukiewicz, the actor who played the main role, what it was like to work in such demanding make-up. “It was really hard. We worked with Waldemar (Pokromski) for about 20 hours a day. At some point, I forgot if I had a mask or face on, and whose face it actually was. In the end, it did not matter, however. The most interesting thing was that I could hide, and conceal my emotions. I did not have to be shy or be ashamed of what I was doing,” said the actor. “Physically, it was very difficult but, as we know, man can endure a lot of physical suffering. It seems to me that the psychological aspect was more interesting, i.e. discovering a different kind of acting, a different way of entering into a character through a physical experience such as a mask,” he added.

“You could hide your feelings under the mask. It’s interesting because Mateusz could cry under the mask or play too expressively, which I hate as a director. However, the mask stopped all these emotions, so I could focus only on the eye. Just putting the make-up on took about 4 hours. It was very tiring, of course, but it was also funny. I mean, the man who created this mask in London said that it should be worn for about 7 hours, but of course this is Poland so we sometimes worked on the set for up to 15 hours, which meant that Mateusz had to spend 15 hours in the mask. Nobody believed that it was possible. Only a Polish guy could put up with that!” – added Małgorzata Szumowska.

“From the beginning, the work was extremely difficult. I had to work (with Mateusz) like with two different people – i.e. the boy from the first part and the person in the mask from the other part. His character lost three quarters of his face in an accident, his eyes were all that was left. It was very important for me, and also for the action within the film, that the first time he met his family after returning from hospital, they should recognise him, but at the same time they should not. When they look in his eyes, they know it’s him, but there are some scenes with his mother where she is not sure if it really is him. It was great working with Mateusz. He had to patiently endure many hours of preparation in the make-up studio. I am very pleased with the results we achieved,” said make-up artist Waldemar Pokromski. 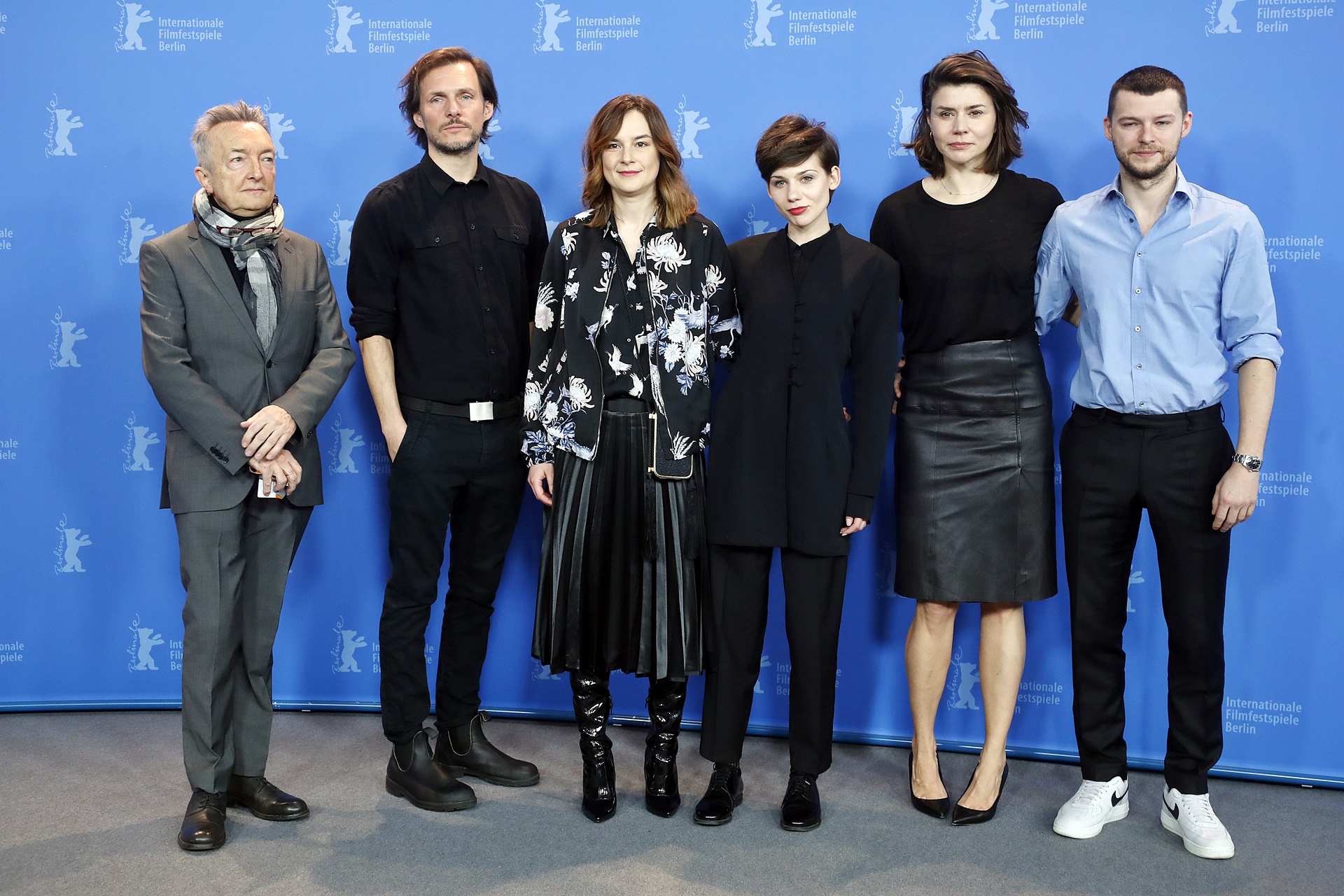 The creators of the film “Mug”. Photo by Sven Darmer / Davids

“We made this film with great tenderness. I like my characters, and I do not judge or ridicule them. I show how things are. People in the countryside live this way and, paradoxically, they are happy and proud (…). I ask questions about today’s Poland, it is my duty (…). We have problems with strangers, with showing somebody who is different, and I want to talk about it,” said Małgorzata Szumowska.

“I do not like to suggest how a movie should be received, but this one talks about reception, about perception. We wondered how to talk about deformity or physical disability, and also how to talk about a dysfunctional society. As we decided to talk about it in the form of a modern myth or fable, the kind of aesthetics we were looking for led us to locations in the south of Poland, where it is tempting to focus on the landscapes and how people are connected to their homeland. Through this, you can create an atmosphere of mystery or even fear, which is present not only in the people but also in the landscape,” noted the director of photography.

Journalists at the conference praised the performance in the film of Agnieszka Podsiadlik, who played the main character’s sister. “Becoming a character begins in one’s head, it starts with thinking. It’s mostly about intuition. I do not really recognise the moment when it happens. It was the same with this role. When I read the script for the first time, I knew that my character is of fundamental importance to the main character. It was not straightforward, but it turned out that his sister is in almost every scene. I started thinking about their mutual relationship. For me, it was the most interesting part of the scenario, and the most interesting part of the whole story – the relationship between brother and sister,” the actress said.

“I was very nervous and I did not want to disappoint the people who had chosen me,” said Małgorzata Gorol, who made her big screen debut in the film, adding that she completely trusted the filmmakers on the set. Michał Englert also talked about meeting the person on whose personal story the main character of ‘Mug’ was based: “There was a temptation to treat his story in a very realistic way, to make a thriller out of it. However, we told it like a sort of fable and we did not want to tell it using the conventions of a TV medical drama (…). We focused on how he was perceived, and not on his back story. Of course, it was a deliberate choice to build our story in this way.”

“Małgorzata Szumowska also takes a satirical swipe at social problems, although it must be admitted that she does so in a gentle way. As director and screenwriter, she works very subtly to present her story to the widest possible audience and not to offend anyone’s feelings. ‘Mug’ is a tamed, somewhat tongue-in-cheek, satire, but its observations are accurate and meaningful. In any case, in this Berlinale competition, Małgorzata Szumowska has proved her comedic talent and created a movie that is both funny and intelligent, and thanks to its universal motifs, the film has what it takes to attract an international cinema audience,” writes Sophie Charlotte Rieger at the Filmlöwin blog.

The writer of the review on the Italian portal LongTake.it draws attention to “the excellent cinematography, working in harmony with the sound effects, which gives viewers a disturbing sense of isolation and enables us to empathise with the main character.”

“‘Mug’ is a strange, engaging film – well and potently acted and directed, a drama that puts you inside its extended community with a mix of robust realism and a streak of fantasy comedy (…). Jacek endures his suffering with unassuming dignity and integrity as he is betrayed or let down by everyone (…). It is an absorbing and strange story, expertly managed,” notes Peter Bradshaw in the Guardian.

“This is an unconventional, sad but well-told story (…). It’s all pure cinema, movement, surprise and fast pace,” writes film critic Michael Sennhauser, devoting a lot of space at his blog to the various camera techniques.

“It’s surprising how well-heeled and low-key the drama is, given the shock value of the premise – the story of Poland’s first face transplant recipient. But even if it’s not the edgiest of the director’s films, this study in weathering adversity and adjusting to what life hands you makes some worthy points about human and institutional callousness,” writes Deborah Young in her review in The Hollywood Reporter.

And at Awardswatch.com, Erik Anderson writes that ‘Mug’ was one of the best festival titles at this year’s Berlinale, adding that Małgorzata Szumowska’s latest film is “as brutal as Andrey Zvyagintsev’s film ‘Loveless’ in its harsh critique of Polish society and one of the most interesting reflections on religion in Europe.” “‘Mug’ could have been a conventional story with a lot of fireworks and melodrama. Instead, in the hands of Szumowska, it becomes an intelligent film that never shies away from its brutal critique and social undertones, but chooses to leave the dramatic conflict for the viewers to make their own conclusions,” he writes. (…) The director has created a picture which is “unique and uncompromising, yet bitterly funny,” continues the reviewer, and he goes on to praise the work of the make-up department which, in his opinion, makes the audiences “truly engage with a person who does not recognise himself in the mirror.”

In turn, writing on the webpages of the Cineuropa.org portal, Bénédicte Prot calls ‘Mug’ “a very open and human work”, shot “in such an assured and unpretentious style”, and he comments on the skilful way that the director makes the viewers feel attached to the fate of the main character.

“Szumowska has made a film about provincial Poland. But it’s not only about Poland. She shows a world full of captivating landscapes, but which is ruled by intolerance, fear and aversion towards otherness,” writes Barbara Hollender in her review for Rzeczpospolita. “Szumowska grips the viewer with realism, but at the same time on the screen she creates a metaphor. Her film – with brilliant cinematography by Michał Englert and a superb performance by Mateusz Kościukiewicz – is not a journalistic-style dissertation but a reflection on the contemporary world. It’s a kind of parable,” Hollender writes in her report from Berlinale.

According to Screen International, the sales agent of the film, Memento Film International, sold at the European Film Market in Berlin the rights to distribute ‘Mug’ in such countries as Italy, Greece, Turkey and China. Polish viewers will be able to see Małgorzata Szumowska’s latest work in cinemas in early spring, starting from 6 April 2018. Distributor of the film is Kino Świat.