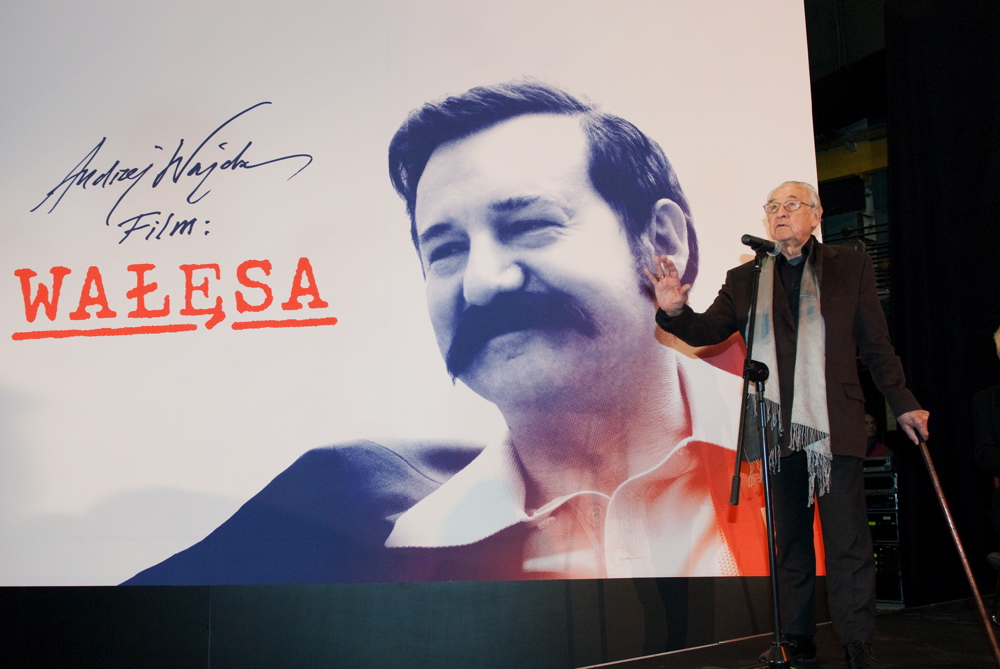 The press conference for Andrzej Wajda’s latest project Wałęsa was held at Warsaw-based WFDiF on November 24. Starring in this biopic for Lech Wałęsa are Robert Więckiewicz and Agnieszka Grochowska. Filming is due to begin on December 1. The picture is co-financed by the Polish Film Institute.

The press conference was also attended by representatives of several institutions that supported the financing of Wajda’s latest project: the General Director of the Polish Film Institute Agnieszka Odorowicz, the mayor of Gdańsk Paweł Adamowicz, the content director of TP Dominique Lesage, and executive director of programming at Canal+ Cyfrowy Beata Ryczkowska.

Andrzej Wajda’s feature focuses on Lech Wałęsa, particularly the first 20 years of his work. The film begins with events that took place in the 1970s, and ends with the speech Lech Wałęsa made in the US Congress in 1989. Wajda will attempt to capture the essence of the transformation of simple common working man into a charismatic leader who managed to liberate dreams of freedom that rested in the hears of millions, and gave the spark for major changes in society.

The General Director of the Polish Film Institute Agnieszka Odorowicz said that the latest picture by Andrzej Wajda is an important film, awaited by many. “There is no other Polish film about which I would receive as many questions from international sales agents and foreign distributors. For the past two years, everyone has been asking what is happening with the Wajda movie about president Wałęsa. […] I believe this film will be a great success.” The Polish Film Institute will contribute six million PLN to the production of Wałęsa.

The Most Difficult Film Ever

Wałęsa by Andrzej Wajda will be the first feature film about this former president of Poland. At the press conference, Wajda said that despite his extensive professional experience, the making of this film will present quite a challenge. “This is the most difficult film I have ever made, and I have to be honest – I have been in this business for 55 years now. […] It is a beautiful thing that such an exceptional man represented us around the world,” said Andrzej Wajda.

“I thought this subject might be interesting; he is a fascinating individual. […] He was loved by some, and hated by others,” said screenwriter Janusz Głowacki. The film features scenes that portray facts from the public and private life of Lech Wałęsa. “I tried to write it in a way as to present as much as possible […] of a man who has found himself in an unbelievable circumstances,” said Głowacki.

Więckiewicz and Grochowska as Mr. and Mrs. Wałęsa

The part of Lech Wałęsa will be played by Robert Więckiewicz, while his wife Danuta will be portrayed by Agnieszka Grochowska. “She was extraordinary, a woman with a great spirit, and I also think that […] she was very free. The actress who will play this part has to forget about fear,” said Grochowska. “I think this will be one of the most difficult parts in my career. […] I will do everything in my power to ensure that it is satisfactory on an artistic level,” said Robert Więckiewicz.

The film will be lensed by Paweł Edelman, who described the visual side of the Wałęsa biopic at the press conference. “The plot will be set on two levels: the everyday life, and the tale of the historic hero. This second level will have us looking at archive footage, and we will try to film sequences that depict this historic truth. This film will be a type of collage,” said Edelman.

Filming is due to launch on December 1. Many scenes will be filmed on location in Gdansk and the Tri-City area. The film is produced by Akson Studio, and co-produced by Canal+. Wałęsa is also co-financed by the Polish Film Institute.

Further details about the project available on the film’s official website: www.walesafilm.com.