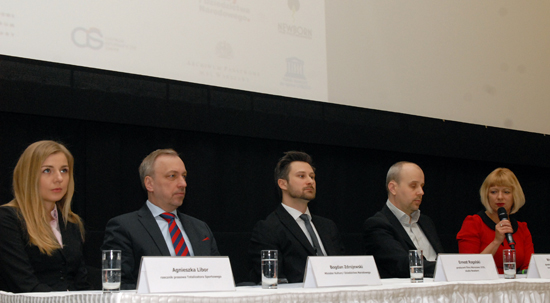 March 15 will mark the theatrical release of Warszawa 1935 (Warsaw 1935), a 3D film presenting Poland’s capital in the period before the Second World War. On February 20, the film’s press conference was held at Iluzjon cinema, where the film’s second trailer was revealed.

Four Years of Work on the Film

Newborn, the company responsible for production of Warsaw 1935, dedicated four years to the making of this short animated film that was aimed at being the first digital reconstruction of Warsaw as it looked in the interwar period of the 1920s and 1930s. The key individual responsible for this project is producer Tomasz Gomoła, who came up with the idea of recreating the spirit and the unique ambiance of the city.

Warsaw 1935 will have a running time of 20 minutes, and will mostly feature the northern regions of Warsaw’s central district of Śródmieście. The film focuses particularly on Marszałkowska street between Aleje Jerozolimskie and Ogród Saski, while also presenting a panorama of Warsaw from the Prudential building, the gardens of Ogród Saski, and Plac Napoleona.

“This is the only such project in the world; no other city in the world has been digitally reconstructed in the way that Warsaw has,” said Ernest Rogalski, the film’s other producer, at the press conference.

Warsaw in the days before the Second World War was often called the Paris of the north. Until Warsaw 1935, the only way to see the city as it looked in those days was in old photographs. Newborn’s goal in the filmmaking process was to depict the spirit of a time that had an abundance of liberal visions of technological solutions and unbelievable progress.

Warszawa 1935 (Warsaw 1935) shows a live city, where the architecture is complemented by the first taxi cabs, gas lamps, asphalt roads, the first horse races at the modern track, a view of the budding Polish automobile industry, as well as Polish aviation, fashion and beauty, theatres, cinemas, art, and film.

“All of Warsaw, our automobile industry and our culture, were very highly developed; we really have a lot to be proud of,” said Ernest Rogalski.

Prudential: A Symbol of Warsaw

Wojciech Pronobis of Prudential Polska said: “This project relates to Poland’s golden age and the golden age of Warsaw in the interwar period. Prudential has decided to support this film project firstly because Prudential was a key insurance company in Poland in the 1930s, and secondly because the Prudential building was one of the symbols of Warsaw in those days. It was Poland’s tallest skyscraper, and the second-tallest building in Europe.”

Producers describe the Prudential building as one of the ‘stars’ of the film.

This digital reconstruction required a substantial amount of effort. It was mostly based on photographs available at the National Archive of the City of Warsaw. Producers had difficulties with finding reference materials necessary for the reconstruction of the automobiles, trams, and horse carriages of the day. One of the most helpful sources of information was www.warszawa1939.pl, a website run by a group of Warsaw-based enthusiasts.

The Educational Value of the Film

“Not only in the Second World War, but also in a series of other unfortunate events that plagued the city, Warsaw really lost a lot. It lost its material heritage, but also its spiritual heritage. We lost a fair amount of archive resources, and any opportunity to retrace the past, where we tread within a space that no longer exists, that has been destroyed […] is a source of great emotions, and has incredible educational value,” said Bogdan Zdrojewski, Minister of Culture and National Heritage, at the press conference.

The production of Warszawa 1935 (Warsaw 1935) was financed mostly by producers Ernest Rogalski and Tomasz Gomoła, and was possible thanks to Prudential Polska (the film’s sponsor), Totalizator Sportowy (the film’s strategic partner), and was co-financed by the Polish Film Institute.

The film has received the honorary patronage of the Ministry of Culture and National Heritage and the Polish Committee for UNESCO. The project’s educational partner is the National Cultural Centre (Narodowe Centrum Kultury).

Agnieszka Odorowicz, General Director of the Polish Film Institute, discussed the involvement of the Polish Film Institute in the project: “We decided to support this project financially not only for cultural reasons, but also for technological reasons. A lot is being said in Polish media about innovation, about how it is important to look for new technological solutions, also in filmmaking. In this project, that concept has become a reality.”

“Our film has 20 minutes of special effects, when even Hollywood films usually have at most several minutes of SFX. When we spoke to representatives of Western companies, they were very impressed that a theoretically small production company can handle such a major project,” said Ernest Rogalski.

Warsaw 1935 in AmbaSSada (The EmbaSSy)

Agnieszka Odorowicz also discussed one further aspect of the project: “We now have footage that hopefully will be about more than simply showing contemporary Poles the breathtaking beauty of Warsaw as it was in 1935. It will also be used in future film production, because this footage allows the use of images of Warsaw as it once was to produce period feature films […]. I hope that the Polish film industry can make good use of this reconstruction, which has been done in such an artful and extraordinary way.”

The producers have already received the first propositions of co-operating on feature film projects.

“We are currently working for Juliusz Machulski on his latest film Ambassada (The EmbaSSy). We are using the city panorama, as well as our knowledge of the architecture in the locations where the film is set,” said Ernest Rogalski.

Warszawa 1935 (Warsaw 1935) will be released theatrically on March 15. The film will screen in several arthouse cinemas in Warsaw, and in cinemas in Krakow, Łódź, Wrocław, Poznań, Gdańsk, and Katowice. Detailed information will be published on March 10 on the film’s official website www.warszawa1935.pl.

The producers are currently in talks about further screenings of the film with several institutions, mainly museums. The film will possibly also be shown in the Museum of the Warsaw Uprising, alongside Miasto ruin (City of Ruins), an animated film that portrays the destruction of Warsaw during the Second World War.

“But we also want to move on,” said Ernest Rogalski. “We want to screen the film in places like the airport, so that tourists could see the city to which they are coming, and learn about its history.”

There are also plans to screen Warsaw 1935 internationally.