Winners of the 26th Warsaw FF 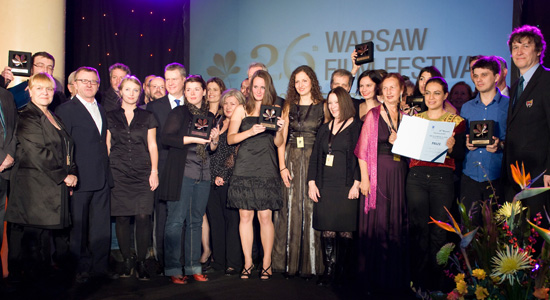 The awards ceremony of the 26th Warsaw Film Festival was held on Saturday, October 16. Awards were presented in the festival’s five competition categories, along with the FIPRESCI Jury Award and the Ecumenical Jury Award. The Warsaw Grand Prix – the top award in the festival’s International Competition, funded by the City of Warsaw, went to Incendies by Canadian director Denis Villeneuve.

“A rich, complicated story about sectarian hatred and family bonds that cannot be broken, a devastatingly beautiful and powerful film – it is rare to encounter such quality of depth of ideas in cinema today,” wrote International Competition Jury members in the jury statement.

The Best Director award went to Olivier Masset-Depasse for Illegal (Belgium). “Based on actual events, the direction of this film draws you in and creates a mesmerising, shocking and profoundly moving experience,” reads the International Competition Jury statement. This year’s Special Jury Prize went to director Bogdan George Apetri and screenwriter Tudor Voican for the script of Romanian feature Periferic (Outbound).

The International Competition Jury members Antonia Bird, Francois Da Silva, Mike Downey, Andrzej Jakimowski and Wolfram Skowronnek-Schaer also gave two special mentions. “By a complete coincidence our top three films have strong women at the centre of their stories – women fleeing from repression, all three lose and then find a son. We would like to honour the three fine actresses who portrayed these extraordinary women: Lubna Azabal in Incendies, Anne Coesens in Illegal, and Ana Ularu in Periferic.“

The Jury also gave special mention to La Vida Util (A Useful Life) by Federico Veiroj for its “cinematic humour.”

Here is what jury member Francois Da Silva told us about the verdict and deliberations of the International Competition Jury: “The verdict was very easy. I have been invited to take part in other festival juries before, but this time we were a very diverse group: young and old, men and women. What’s interesting and manifold is that it didn’t take us long to reach a verdict. The jury members of the 26th Warsaw Film Festival did not know each other before the festival. But we communicated with ease from the start. We reached a decision quickly, even though we established at the beginning that we wouldn’t hold serious debates after every competition screening. Naturally, some people need time to get to the bottom of a film’s meaning. The fact that we met every day was also significant; we met not only after the screenings, but also had our meals together. So we reached a decision very quickly. The verdict was democratic and anonymous.”

The 1-2 Competition Jury of Kirsi Tykkylainen, Francine Bruecher and Lissy Bellaiche decided to award two films ex aequo: The Imperialists Are Still Alive! by Zeina Durra (USA) and Erratum by Marek Lechki (Poland). In the director’s absence, the award for Erratum was accepted by actor Tomasz Kot. “I will be happy to pass this Leaf on to Marek,” he joked. “I wanted to say that I only half-know English. Please translate this: Thank you very much on behalf of Marek Lechki.”

The creators of the other awarded picture also appeared on stage. “It is a great honour to receive this award in a country with such great cinematic traditions. I have to say that the Warsaw audience is really special, truly phenomenal. I have shown this film in many places around the world, but never, even fearing what might be lost in translation, have I had such amazing feedback from the audience. They were truly wonderful. I cannot wait to show our next film in Warsaw.”

The Free Spirit Award went to Sound of Noise by Ola Simonsson and Johannes Stjärne Nilsson (Sweden). Jury members Mariana Secco, Victoria Szymańska and Alejandro Diaz San Vicente were unanimous: “After enjoying the variety of fresh visions, we decided to choose the film in which we found eccentric characters driven by hilarious and witty circumstances. Unforgettable and strongly entertaining scenes. Unusual performances and brave usage of narrative elements. All this rhythmically orchestrated in one cinematic experience.” The award was accepted by one of the film’s co-author’s, who said “we are honoured, and at the same time extremely surprised. During the screenings here in Warsaw we felt the audience viewing our film with an open heart; as we can see, the Jury took a liking to it as well. Thank you for that.”

The award for Best Feature Documentary went to Oko Nad Prahou (Eye Over Prague) by Olga Špátova (Czech Republic). Jury members Richard Lowenstein, Maryna Ajaja and Anita Juka awarded the Czech project for “For catching the emotional resonance of a man who was before his time . The filmmaker shows the compassionate and compelling documentation of the life of an artist via the illuminating journey of their final work of art.” The award was accepted by the film’s producer.

The winner of the Short Film Competition was Colivia (The Cage) by Adrian Sitaru (Romania). The film was awarded “for an outstanding and unpretentious way of dealing with the subject. For the simplicity of execution, but also for very complex performances of the actors, which enabled the real persons to appear on screen.”

The FIPRESCI (International Federation of Film Critics, www.fipresci.org) award for Best Eastern European Debut went to the Romanian film Periferic (Outbound) by Bogdan George Apetri. The winning project took part in CentEast 2009 in Warsaw, where it was shown as a promising work in progress.

The Ecumenical Jury awarded De la infancia (Childhood) by Carlos Carrera (Mexico). The jury statement explains that this Mexican film is “a touching dramatic story and universal challenge that deal with difficult conditions of children deprived of security and stability due to the behaviour of adults, men in particular. In this protest against violence, only by acting responsibly, evil will not dominate and a glimpse of hope could appear for families in distress.”

More information about the 26th Warsaw International Film Festival is available at www.wff.pl.