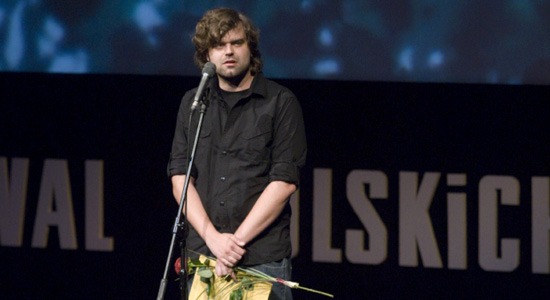 Friday night brought the “small gala” of the 35th Polish Film Festival in Gdynia. The festival’s non-statutory awards were presented at this ceremony.

The event was held to announce winners of the Young Cinema Competition and Independent Cinema Competition, along with several other awards. The first award at the ceremony was the decoration of festival director Leszek Kopeć with Silver Gloria Artis – the medal of the Ministry of Culture and National Heritage. “I love Polish cinema and filmmakers with the unconditional love of a child,” said Kopeć, deeply moved.

The Crystal Star of ELLE magazine was presented for the first time. It went to Anna Kazejak, director of Skrzydlate świnie, which screened in the festival’s Main Competition.

The Golden Claquer for the festival’s longest-applauded film went to Jan Kidawa-Błoński, director of Różyczka (Little Rose). “Many thanks. This is my second Claquer award, the first being for Skazany na bluesa. This is a good sign, because I know that films recognized with this award live long,” said Kidawa-Błoński.

Różyczka also received the Golden Kangaroo – the Australian award for best Polish feature film. The award was presented to the film’s producer Włodzimierz Niderhaus. “The producer would never receive awards, if it wasn’t for the director and everyone involved in the making of the film. I would like to thank them all,” emphasized Niderhaus.

The award of the Art-house Cinema Network went to Wenecja (Venice) by Jan Jakub Kolski for “exquisite visual qualities that inspire the audience’s imagination.”

The award of the Film Debate Clubs was presented to Marcin Wrona, director of Chrzest (The Christening). “I grew up on film debate clubs; I know very well that films screened there are far from supplying mindless entertainment – they are films that make you think,” said Wrona in his acceptance speech.

The Amber Lions Award for the film with highest admission results over the past year went to Ciacho by Patryk Vega.

The two key awards for independent filmmakers were funded by Kino Polska. The special award went to Tam i z powrotem by Michał Baczuń. The Grand Prize for best film went to actor-director Arkadiusz Jakubik for his Prosta historia o miłości. “This is the first award I ever received. All the more thanks. This award is for the entire crew,” said Baczuń.

The jury awarded special recognition to four films in the Young Cinema Competition. These were Szelest by Leszek Korusiewicz, Przez szybę by Igor Chojna, MC. Człowiek z winylu by Bartosz Warwas, and Noc życia by Antoni Królikowski, who was unable to attend and accept the award; the award was accepted in his name by his lecturer, Maciej Ślesicki. On stage, he read a long text message from the award winner, thanking everyone who supported him in the making of his film.

The Special Award went to Julia Kolberger for her graduation film Jutro mnie tu nie będzie. The Grand Prize was presented by Bartek Konopka, president of the Young Cinema and Independent Cinema Jury.

“We decided to award two grand prizes ex aequo. Being part of this jury was a pleasure. The most important fact is that you have given us and your audiences so many fantastic stories,” said Konopka, addressing the filmmakers, and adding: “It’s a good thing you’re not afraid to speak your mind.”

The two winning films were Urodziny by Jenifer Malmqvist and Twist & Blood by Kuba Czekaj, who won the Grand Prize in the same competition at last year’s festival. “I would like to thank my coworkers and artistic supervisors,” said Czekaj.