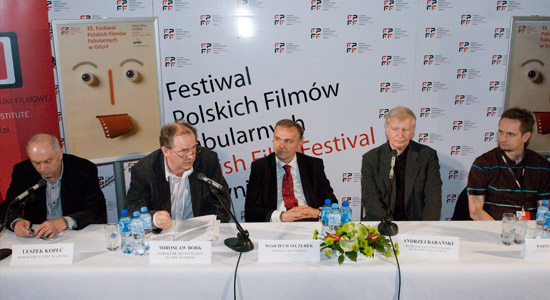 Tonight’s gala at Gdynia’s Teatr Muzyczny marked the opening of the 35th edition of the annual Polish Film Festival.

“Ladies and Gentlemen, this edition of the Polish Film Festival is, as it is each year, a celebration of Polish cinema, although we are all aware of the current situation in our country,” said Mirosław Bork, the festival’s artistic director, at the opening ceremony. He encouraged all festival guests to donate funds or goods to those who suffered in the flooding. “The films you will watch at our festival, and everything we do – it all relates to the world we live in. The difficult situation of the past days is also a part of that world,” he added.

“I feel this is my responsibility – albeit a difficult one, as I will be judging my colleagues. Then again, I myself have been judged by colleagues dozens of times,” said Andrzej Barański at the  press conference held before the opening gala.

“It’s not easy, because they are our fellows. We will later have to talk to them, explain why we chose one film and not another. But I am very curious about these films and I am eager to watch them,” added Konopka.

Mała matura 1947 by Janusz Majewski was screened after the gala opening. Majewski’s feature is one of twenty films in this year’s Main Competition. This coming-of-age period piece is set in the years immediately after the Second World War – in the early years of Poland under communism. It follows the story of a young boy named Ludwik. He goes to a good school, makes many friends. When Stanisław Mikołajczyk arrives in Krakow before the June referendum, Ludwik accidentally gets involved in a street brawl, and is subsequently arrested. His personal, family, and political affairs all blend into one in the tumultuous year 1947.

“I just realized why it’s a good thing to make movies. The stage fright before their screening, especially the premiere screening, has a rejuvenating effect,” quipped director Janusz Majewski before the screening.

One of the events that surround this year’s jubilee edition of the Polish Film Festival in Gdynia is an exhibition entitled “35 Years of the Polish Film Festival”. It was opened to the public in the Gdynia City Museum by the museum’s director Dagmara Płaza-Opacka and the exhibition’s creators: Mieczysław Kuźmicki, director of the Museum of Cinematography in Łódź, and exhibition curators Krystyna Zamysłowska and Piotr Kulesza. One of the first guests to visit the exhibition was Wojciech Szczurek, mayor of Gdynia.

The exhibition will be an opportunity to learn about the festival’s history through photographs from all previous editions, and posters of winning pictures; the exhibition also boasts elements of film sets and archive film footage, and awards of the festival’s past winners, including the festival’s first-ever award, presented to Jerzy Hoffman for Potop (The Deluge) in 1974.