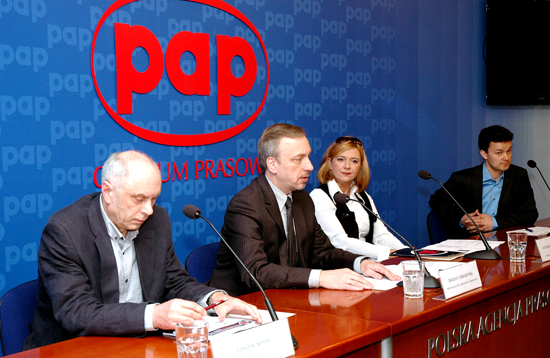 This year’s edition of the Polish Film Festival will mark a significant change from previous years. Twelve films will screen in Main Competition, while the Panorama of Polish Cinema will feature a selection of only nine films. Two Polish films will screen out of competition and outside the Panorama section. 30 student films made the cut for the Young Cinema Competition. All festival sections will feature a total of over 20 full-length Polish films produced over the past year.

Bogdan Zdrojewski, Minister of Culture and National Heritage, emphasized that the festival’s new artistic director Michał Chaciński’s decision to limit the number of competition films was met with approval of the festival organizers. “We decided that in view of the large number of films on the market today, it is good to introduce a harsh screening process. That’s what happened this year. […] The selection wasn’t easy, because we had a lot of good films to choose from.” According to Minister Bogdan Zdrojewski, all films in this year’s competition lineup meet the high standards specified in the new festival regulations.

Agnieszka Odorowicz, General Director of the Polish Film Institute, pointed out that the change of  the festival’s profile coincided with the appointing of the new artistic director. “Michał Chaciński was elected to this position, having expressed in his programming concept a new way of looking at the Gdynia festival as something more than simply an annual review of Polish cinema.” According to Odorowicz, the festival lineup features a selection of excellent films that bring something new to Polish cinema; films that have a chance of being a respectable representation of Poland abroad.

Agnieszka Odorowicz also focused on a key change in the festival profile – the discontinuation of the Independent Cinema Competition. “There is a wide variety of independent film festivals in Poland, also supported by the Polish Film Institute. There is no reason to mix professional film with independent filmmaking in Gdynia,” said Odorowicz. This, however, does not mean that independent films will not screen at this year’s Gdynia event. They will be shown in a separate section focused on short films. One of the festival evenings will be dedicated to screening 16 films that will be judged and awarded by the festival audience.

Another significant change at the 36th edition of the Polish Film Festival in Gdynia will be the festival juries that will now include guests from abroad. “I believe that after all these years we should return to having an international jury. We managed to form one this year,” said Michał Chaciński. The Main Competition jury will be presided by Paweł Pawlikowski, a Polish film director based in the United Kingdom. Other jury members include cinematographer Ryszard Lenczewski, director and screenwriter Ari Folman, actress Maja Ostaszewska, opera, film and stage director Mariusz Treliński, writer and literary critic Walter Kirn, pianist and composer Leszek Możdżer, producer and project development expert Robert McMinn, and Rotterdam International Film Festival programmer Ludmila Cvikova.

The four-member Young Cinema Competition jury will be presided by director and screenwriter Paula Markovich. Other jury members include director Paweł Borowski, actor and director Arkadiusz Jakubik, as well as director, playwright, and screenwriter Paweł Sala.

Michał Chaciński mentioned that for the first time in the festival’s history films submitted for the Young Cinema Competition also went through a screening process. “54 films were submitted, and 30 of them made the cut. Student films should be treated the same way that feature films are treated. We want to screen films that are well-made,” said Chaciński.

A key event of the 36th Polish Film Festival will be the presentation of the Platinum Lions awards to two acclaimed Polish filmmakers: Roman Polański and Tadeusz Konwicki.

In addition to film screenings, this year’s festival programme also features film workshops divided into several sections. “Masterclass: the Anatomy of the Sequence” will be a series of meetings with audiences, focused around filmmakers sharing their experience based on a a single selected film sequence. This workshop will begin with the analysis of the shot glass scene from Popiół i diament (Diamonds and Ashes), hosted by the film’s director Andrzej Wajda, together with Janusz Morgenstern, who was the brain behind this particular sequence. Other key film sequences will be discussed by Krzysztof Zanussi, Agnieszka Holland, and Roman Polański.

Another new feature of the festival is the “How Is It Done?” workshop, which will be hosted by the filmmakers behind some of the latest Polish films: Lech Majewski, Jan Komasa, Greg Zgliński, and Wojciech Smarzowski, who will explain how they created their film world. The “History of Film: Surrealism in Polish Cinema” workshop will feature filmmakers not linked with the mainstream of Polish cinema: Andrzej Żuławski, Andrzej Barański, and Grzegorz Królikiewicz.

A key point of this year’s festival will be the focus on international cinema in the Panorama of Eastern Europe section, which will feature nine films that have been recognized at key international film festivals around the world. “I think it’s important to pursue this excellent idea of the festival’s previous artistic director, Mirosław Bork – opening Gdynia to the films from neighbouring countries,” said artistic director Michał Chaciński.