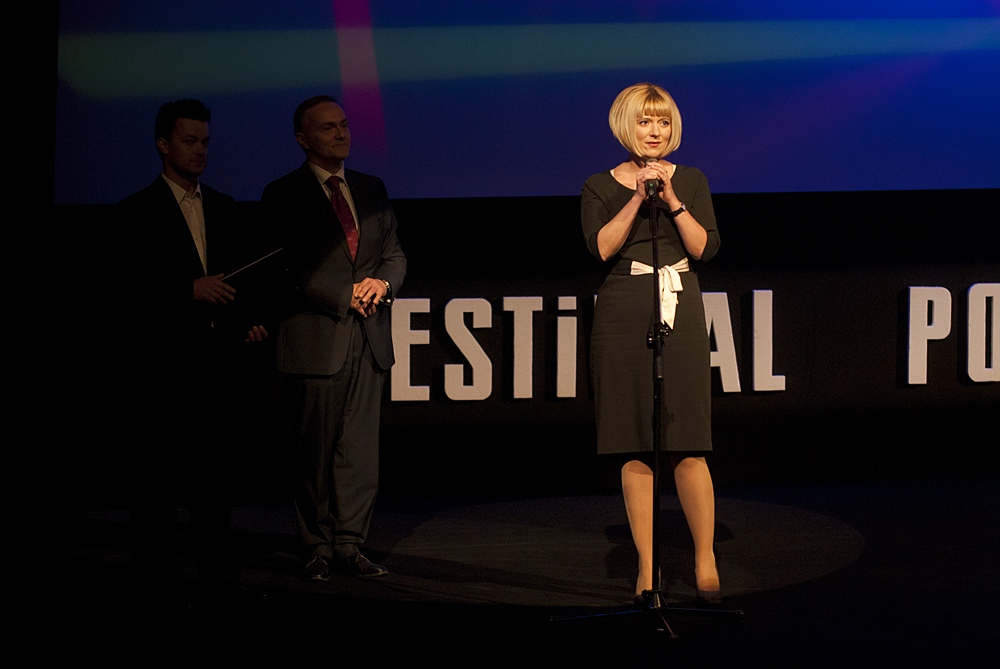 The 37th Gdynia Film Festival has begun. The event was opened by Michał Chaciński – artistic director of the Gdynia Film Festival, Wojciech Szczurek – mayor of Gdynia, and Agnieszka Odorowicz – General Director of the Polish Film Institute. The festival opened with a screening of Jesteś Bogiem (You’re a God) by Leszek Dawid, produced by Studio “Kadr” and co-financed by the Polish Film Institute.

“The festival is changing […]. Our efforts go towards ensuring that we do the best possible job at planning every hour of your time here at the festival. The Main Competition, Panorama, and other sections of the festival feature a total of over 20 Polish films and international co-productions made in the last several months. That is over half of all films submitted to the festival. You will agree that these statistics are not bad […],” said Michał Chaciński in his opening address.

“The latest statistics in Polish cinema are excellent. Last year, Polish films marked almost 12 million admissions. That’s 30% of the market share, a truly excellent result. I would really like to believe that the Gdynia Film Festival also has its share in this improvement of the perception of Polish cinema, increasingly reflected in box office results […]. We also present a variety of retrospectives, classic films, digitally restored prints, as well as a number of workshops, discussion panels, scene analyses – everything you need to be able to say without a touch of irony that the week you spend in Gdynia is a celebration of Polish cinema,” said Chaciński at the opening ceremony.

The audience of the opening gala held at Gdynia’s Music Theatre was also welcomed by mayor Wojciech Szczurek. “Once again we welcome the festival and its screenings, exhibitions, workshops. But what I find most important is this unique atmosphere that you help bring to our city year after year. The festival team has done an amazing job of ensuring that the artistic programme of this festival be filled with high-ranking events. It was our mission to make this festival a great celebration of Polish cinema. Q&A sessions of filmmakers and actors with the festival audience – this is once again a great challenge ahead of us. I am very glad that the Gdynia Film Festival has attracted such a high number of visitors to our city. I am also very glad that Agnieszka Odorowicz is here with us,” said mayor Szczurek.

Before the festival’s opening screening of Jesteś Bogiem (You’re a God), director Leszek Dawid and producer Jerzy Kapuściński told the story of the making of their film about Paktofonika. They invited their collaborators to join them on stage. These included current Studio “Kadr” director Łukasz Barczyk, executive producer Wojciech Kabarowski, screenwriter Maciej Pisuk, cinematographer Radosław Ładczuk, the film’s protagonists Wojciech Alszer (“Fokus”) and Sebastian Salbert (“Rahim”), as well as the leading cast: Marcin Kowalczyk (as “Magik”) and Dawid Ogrodnik (as “Rahim”).

Thanks from the Creators of Paktofonika

“Our struggle to write the script, publish it, have someone accept it, lasted several years. Finally ‘Kadr’ made it happen – this film about Paktofinika was at last finished in 2012. This makes me very happy especially because Maciej put a lot of heart into this, and I think he did a pretty good job – something you will be able to judge for yourselves in a few minutes. And another thing, probably most important, is that our colleague, who has been dead for over a decade, will now be immortalized. For this I am very grateful,” said Sebastian “Rahim” Salbert before the screening. Jesteś Bogiem (You’re a God), screening in Main Competition of the 37th Gdynia Film Festival, is set for a theatrical release on November 9, 2012.