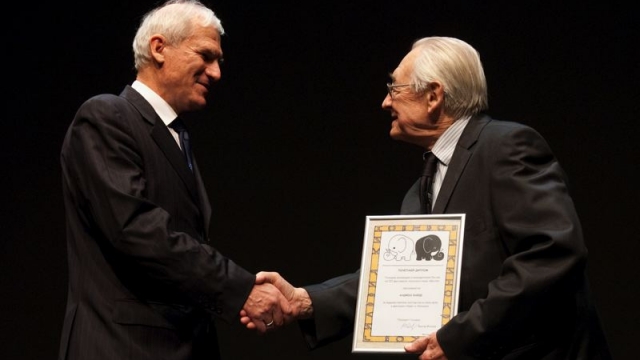 November 4 brought the opening gala of the 4th “Sputnik over Poland” Russian Film Festival. The evening was hosted by Jan Szczygieł, who welcomed guests as they gathered in the Concert Hall of Warsaw’s Palace of Culture. Honourable guests included Russian Ambassador to Poland Alexander Alexeev, advisor to the President of the Russian Federation for Cultural Matters Yuri Laptev, representative of the Ministry of Culture of the Russian Federation Margarita Tersaakova, and deputy director of the Russian National Film Archive Vladimir Dmitriev. The festival is also attended by filmmakers, critics, actors, and producers from Russia.

The Polish side was represented by deputy mayor of Warsaw Włodzimierz Paszyński and Undersecretary of State at the Ministry of Culture and National Heritage Monika Smoleń. Sitting in the audience were also members of the competition jury – head of the jury Andrzej Żuławski and film critics Anita Piotrowska and Tadeusz Sobolewski.

After a performance by one of the laureates of the Russian Song Festival, festival director Małgorzata Szlagowska-Skulska and managing director Piotr Skulski appeared on stage. “Our festival is caviar and champagne, surely because the 160 films you are about to see at our 700 screenings will certainly speak for themselves. We have an excellent competition section, wonderful women’s films, and films for young audiences. But in reality, if it wasn’t for all of you here this evening, if it wasn’t for the audiences, the media, the jury, and our festival partners […], this festival would never be possible,” said Małgorzata Szlagowska-Skulska as she mentioned the “Little Sputnik” children’s festival section and thanked the co-workers who have been with the festival since its early days. Piotr Skulski said warm words of welcome to the visitors from Russia: “This is our joint celebration; a celebration that will continue over the next ten days. I wish you nothing but wonderful moments at our festival,” he said.

Ambassador of the Russian Federation to Poland Alexander Alexeev was next to address the festival guests. He spoke of the potential brought by the presentation of Russian films in Poland and Polish films in Russia. He also mentioned Andrzej Wajda, also present at the ceremony, receiving the Russian Order of Friendship. “If watching all the films at this festival will bring us more friends, it will mean that the festival was a success,” said the ambassador as he thanked the festival team.

Yuri Laptev, advisor to the President of the Russian Federation Dmitry Medvedev for Cultural Matters then read a welcome letter from the Russian President. President Medvedev emphasized in his letter that “Sputnik” is a symbol of the fruitful cultural co-operation between the two countries and “fosters […] the rebirth in Poland of an interest in the art, history, and life of contemporary Russia – a country that wishes to be closer and more attractive to its neighbours.”

“It is the fourth time that this spectacular and surely unique Russian film festival in Poland is organized. Next spring, we will await Polish films in Russia. Only at this festival does the audience have an opportunity to see the entire retrospective, or at least a large share of the history of Russian cinema. And Russian audiences have an equal opportunity to watch Polish films. This allows audiences to benefit from the screenings personally; each viewer will have their own feelings and thoughts. It is also an opportunity to see people who for years worked in the times they had to live in. This is the best way of bringing the two nations closer together, helping them to understand each other. In many ways, we share a common history; we experienced the same misfortune,” said Yuri Laptev before reading the letter of the President of the Russian Federation.

In a letter to the audiences and guests of “Sputnik over Poland”, President of Poland Bronisław Komorowski said: “I am glad that for a fourth year running Polish audiences have the opportunity to watch spectacular examples of Russian cinema. Getting to know one another is of fundamental importance for building good and friendly relations between nations, and experiencing art and literature made by representatives of other nations is an excellent opportunity to further this process. Bringing Poles and Russians closer together will continue thanks to meetings in the cultural sphere. This is true today, when screenings of Polish films in Russia and Russian films in Poland attract crowds of moviegoers, eager to experience a true feast for the soul. I hope that this year’s edition of the festival will play an important role in being a meeting point. May this key artistic event contribute to strengthening the relations between our two nations. If that happens, it will be our great success together.”

During the opening ceremony of “Sputnik over Poland”, head of the Russian Chamber of Film Critics Viktor Matizen presented Andrzej Wajda with the award he received at the 3rd “Wisła” Polsih Film Festival in Russia, which took place last spring in Moscow. “Russian cinema is close to the great Russian literature […]. Russians take responsibility for their actions. That is beautiful. It is about time that we follow that example,” said the director of Tatarak (Sweet Rush) in his acceptance speech, referring to an article by Tadeusz Sobolewski regarding the programme of “Sputnik over Poland”.

The 4th  “Sputnik over Poland” Russian Film Festival will run in Warsaw through November 14. The festival will then continue its tour through a number of Polish cities and on the iplex.pl film website.

Detailed festival programme available at: www.sputnikfestiwal.pl (Polish and Russian only).