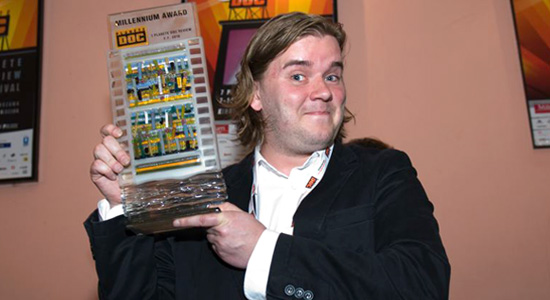 Awards in ten different categories were handed out on May 15 at the closing gala of the 7th Planete Doc Review film festival. The ceremony was hosted by festival director Artur Liebhart. “Ten days of screenings in three cinemas in Warsaw and another 20 cinemas throughout the country proved that documentary film is very popular in Poland. We had the honour of welcoming some of the most acclaimed filmmakers in the field, who presented their latest films at our festival,” Liebhart said.

Members of the Millennium Award Jury thanked the festival team for the opportunity to watch 22 films over the course of the Planete Doc Review Festival, and encouraged filmmakers to work on new and interesting projects. The jury, led by Iranian director Arash T. Riahi, included Pamela Cohn, Anna Ferens, Masha Novikova, and Marcin Latałło, decided on honourable mention for three projects: La machina by Thierry Paladino, David Wants to Fly by David Sieveking, and Last Train Home by Lixin Fan.

The jury unanimously granted the Millennium Award to Mika Hotakainen and Joonas Berghall, creators of the Finnish film Miesten vuoro (Steam of Life). “This project is an outstanding work of film art in many ways. We were most moved by the depth and complexity of the film’s protagonists. We were impressed by the photography and the emotions that the exceptional closeness with the characters evokes in the audience. It was this closeness that the creators were able to show in a convincing and moving way. Steam of Life is a subtle and thorough study of man in a moment of weakness; the presented stories do not cease to amaze,” said the Jury in its official statement. Steam of Life is an amusing and touching, albeit bittersweet, look at sauna regulars, Finnish men (to whom the film is also dedicated). The award was accepted personally by one of the film’s co-creators, director Mika Hotakainen. “I was so afraid of this moment that, like the men in our movie, I had to go to the hotel sauna to relax,” he quipped. “I am very glad to be in Warsaw. The most important fact is that today is the first time I am accepting an award for this film outside of Finland. I would like to dedicate this award to the strong and courageous people who appear in our film,” said Hotakainen.

The Magic Hour Award in the competition for films under 70 minutes in length went to Michał Marczak’s Koniec Rosji (At the Edge of Russia). The jury verdict stated that awarding this particular film was a means of recognizing the “conscious crossing of boundaries in documentary filmmaking, a creative approach to reality, and a kind look at the people lost in the emptiness of the cold landscape somewhere at the end of the world.” When accepting the award, director Michał Marczak mentioned that his film was actually finished a mere ten minutes before the first festival screening. The cash prize for the Magic Hour Award was sponsored by the Polish Film Institute. Marczak said he was planning to spend it on his next project, which is to be set in Brazil. The jury, led by Paweł Łoziński, also gave honourable mention to Antoine by Laura Bari and Countryside 35×45 by Evgeny Solomin.

This year also marked the first time the Festival’s Greatest Personality Award was handed out. This award went to Dr NakaMats – a Japanese inventor, who visited the Planete Doc Review festival as the protagonist of The Inventions of Doctor NakaMats, directed by Kaspar Astrup Schröder.

Artur Liebhart mentioned that the winner of the Chopin’s Nose Award for best and most inspiring film about music was announced on the first day of the festival. The award went to Full Metal Village by Cho Sung-hyung.

This year’s award of the Arthouse Cinema Network (SKSiL), voted by the audience of the “Weekend with Digital Planete Doc Review” went to Videocracy, directed by Erik Gandini. This award ensures that the winning film will receive distribution support from the network.

The winner of the Ecumenical Dialogue Award was announced by Max Cegielski, journalist and chairman of the jury for this competition. From among the ten nominated titles, honourable mention went to Old Partner by Lee Chung-ryoul. The Ecumenical Dialogue Award went to the director of Contact, Bently Dean. “Film is a group exercise, which means there are many people I would really like to thank. But the most important of these is Yuwali, the main character in my film. She is the real winner here. She told us about the cultural differences and the changes that took place over the years. I am truly touched to see that the film is well-received by audiences around the world,” said Dean when accepting the award.

Contact is the story of the Aborigines’ first encounter with white men and the civilization they brought to Australia. The film was previously voted Best Australian Documentary at the 2009 Sydney Film Festival.

The Amnesty International Award for best film on human rights was awarded for the third time in the history of Planete Doc Review. Seven films competed for the award, and the jury, led by Draginja Nadazdin, chief executive of Amnesty International Poland, gave honourable mention to Cowboys in India by Simon Chambers. The grand prize in this category went to Weapon of War by Ilse and Femke van Velzen. The winning sister duo sent in a thank you video, which was screened at the awards ceremony.

The 7th Planete Doc Review Audience Award went to La Machina by Thierry Paladino, while the winner of the Panasonic Green award in the competition for best film on environmental issues was Into Eternity by Michael Madsen.

After the 7th Planete Doc Review awards ceremony came to a close, Artur Liebhart thanked the festival’s sponsors, media partners, and over 100 volunteers that helped with this year’s events.