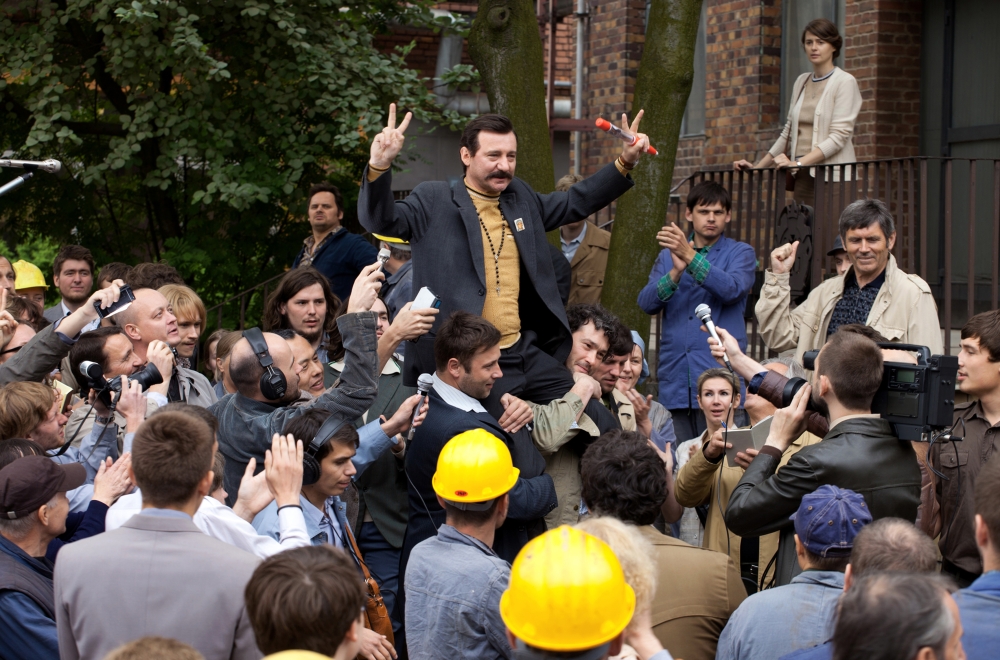 Out of Competition Screenings

Wałęsa. Człowiek z nadziei (Wałęsa. Man of Hope) will screen at the 70th Venice IFF as one of a number of films screening out of competition, including the latest projects by such directors as Kim Ki-Duk, Patrice Leconte, and Ettore Scola.

On September 5, before the world premiere screening of Wałęsa, Andrzej Wajda will be presented with the 2013 Persol Prize of the Venice International Film Festival – an award aimed at celebrating legends of international cinema.

“Wajda is not just the most emblematic director in post-war Polish filmmaking. He is the director who has been capable […] of raising the most decisive and important questions about the history of his country, and consequently, of Europe in its entirety, inviting us to reflect on the critical relationship between personal experiences and those of an entire nation, between the anguish that often befalls individual destinies and the weight of the collective task they are called upon to accomplish,” said Venice film festival director, Alberto Barbera.

A Film Co-Financed by the Polish Film Institute

Wałęsa. Man of Hope was written by Janusz Głowacki and lensed by Paweł Edelman. The film features an all-star cast; the lead roles are played by Robert Więckiewicz and Agnieszka Grochowska, with supporting performances from Maria Rosaria Omaggio, Zbigniew Zamachowski, Maciej Stuhr, Mirosław Baka, and Cezary Kosiński. The film was produced by Akson Sudio, co-produced by Orange – Telekomunikacja Polska S.A, NCK – the National Center for Culture, TVP – Telewizja Polska S.A., and Canal+ Cyfrowy S.A. Wałęsa was co-financed by the Polish Film Institute, with Grupa ENERGA acting as Main Sponsor and SAUR Neptun Gdańsk as sponsor. The film was made in partnership with Gdańsk – the City of Freedom, and is to be released under the Honorary Patronage of Bogdan Zdrojewski, Minister of Culture and National Heritage of the Republic of Poland.

Andrzej Wajda, winner of the Lifetime Achievement Academy Award® emphasizes that the Venice premiere is an extraordinary form of recognition that acknowledges the international dimension of the project.

“I welcomed the news on the selection of my latest film to the Venice Film Festival with great delight. The Venice Film Festival has played a major role in my life – it was there that I received the Golden Lion for the Lifetime Achievement in 1998, and the Nastro d’Argento Europeo Prize of the Italian Journalist for my film Katyn in 2009. It was also there that my film Ashes and Diamonds screened in 1959 in a small cinema out of the official program (a result of the then communist powers’ of my country ban on its international release), where it was noticed and thus began its circuit around the world. Hopefully this time the Venice Film Festival will open the doors to the world for my next film, Walesa. Man of Hope.”

In discussing the film’s premiere, the film’s producer and founder of Akson Studio Michał Kwieciński said that this marks a historic event for his company: “Another reason why this will be a significant and memorable experience is that the 70th edition of the Venice Film Festival coincides with the upcoming 70th birthday of President Lech Wałęsa. Congratulations!”, he added.

Wałęsa. Człowiek z nadziei (Wałęsa. Man of Hope) connects the historical events of the 1980s with the private, intimate sphere of those involved. Andrzej Wajda presents the grand historical changes that were formed not only at party meetings, rallies, and the Polish Round Table negotiations, but also in a modest flat in one of Gdańsk’s working-class apartment buildings. By watching the family life of this trade union leader, the film attempts to grasp the unique transformation of an ordinary man, focused on everyday life, into a charismatic political forerunner. The history of the Polish political transformation is also the life story of Lech Wałęsa’s wife Danuta and their children; a family that was supposed to lead an ordinary life, but instead found itself in the midst of historic watershed moments. This is the story of a husband, a father, an ordinary worker; a man who helped release the suppressed dream of freedom, lying dormant deep in the souls of millions. A controversial figure with his own weaknesses, a man both mocked and admired – who is Lech Wałęsa?

A Triptych Focused on Man

Following Man of Marble and Man of Iron, Wałęsa. Man of Hope concludes Wajda’s triptych, which focuses on man and his struggle against injustice. The Wałęsa. Man of Hope project is the tale of a time when such a fight heralded changes across the European continent and gave a reason to look boldly to the future. It is the story of a man who did not give up hope.

Wałęsa. Człowiek z nadziei (Wałęsa. Man of Hope) will have its theatrical release in Poland on October 4. The film’s Polish distributor is ITI Cinema, while world sales are handled by Films Boutique.

Further details about the Venice IFF are available at www.labiennale.org/en/cinema/70th-festival.