Awards of the 35th Polish Film Festival in Gdynia 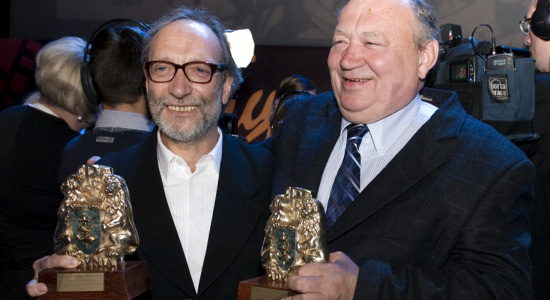 The “Golden Lions” Grand Prize of the 35th Polish Film Festival for best feature film went to the creators of Różyczka (Little Rose) – director Jan Kidawa-Błoński and producer Włodzimierz Niderhaus. The “Platinum Lions” Lifetime Achievement Award was presented to Janusz Morgenstern, director of such films as: Trzeba zabić tę miłość; Jowita; Do widzenia, do jutra (Good Bye, Till Tomorrow) and Mniejsze zło (The Lesser of Two Evils) – fragments of which were screened at the Gala.

“This is something one can only dream of; having something like this happen to a regular director, trying to find his place in this world. I would like to thank you from the bottom of my heart. I just wanted to say very quickly that today is a very important day for me. As I listened to everyone here on stage tonight, they talked about their specific accomplishments in a particular film. Whereas for me, the issue is much wider. I would most like to address the first five years of my work, when our film industry was only getting started. Being here, I would like to focus on the people that are no longer with us – all my professor, my fellow directors, my fellow producers – everyone who is alive in my memory; and, having made a large number of films, there was really quite a lot of these people. I have the fondest memories of them. Many thanks […]. I would like to congratulate and wish all the best to my wife Krystyna. Good bye, till tomorrow!” said Morgenstern.

The closing gala and awards ceremony of the 35th Polish Film Festival in Gdynia was opened by Wojciech Szczurek, mayor of Gdynia, and Agnieszka Odorowicz, director of the Polish Film Institute. Odorowicz mentioned that the collecting of funds at the festival for the restoration of Lanckorona that suffered in the flooding brought over 70,000 PLN.

The closing gala of the 35th Polish Film Festival was dedicated to Frederic Chopin. The ceremony screened excerpts of films about the famous composer, but also short banter scenes, made to look like television shows of various stations, with the roles of journalists and experts played by acclaimed Polish actors: Tomasz Kot, Rafał Mohr, Maria Seweryn, and Wiktor Zborowski. Also performing at the ceremony was Włodzimierz Pawlik’s jazz orchestra, and the accordion band known as “Motion Trio”.

The award for Best Make-Up was presented by George Sand (Danuta Stenka) and Frederic Chopin (Piotr Adamczyk) to Iwona Blicharz for her work on Joanna by Feliks Falk.

Janusz Kijowski and Waldemar Pokromski presented the award for Best Acting Debut. “One must be born a star, but hard work is also important,” they said. Trzy minuty. 21:37 (Three Minutes: 21.37) and Wenecja (Venice) – these were the films in which young Marcin Walewski appeared. It was for this debut that he received this award. The young actor thanked both directors, his family, and the audience.

Agnieszka Smoczyńska and Bartosz Konopka presented the award for Best Sound. The award went to Wiesław Znyk and Joanna Napieralska for Różyczka (Little Rose). “We are glad that our attempt at reconstructing the sounds of the 1960s found acclaim with the jury,” said Napieralska as she thanked her co-workers. “Sound isn’t everything; tomorrow I am going to mow the lawn at my summer house,” added Wiesław Znyk.

Best Editing – the award in this category was presented by Andrzej Fidyk and Árni Óli Ásgeirsson from Iceland, member of this year’s Main Competition jury. The award went to Piotr Kmiecik; in his absence, it was accepted by director Marcin Wrona. “We wanted feelings to be more important than the editing itself,” said Wrona, reminiscing on his co-operation with Kmiecik.

The award for Best Directorial Debut was presented by Alicja Bachleda-Curuś and Wojciech Szczurek. Bachleda-Curuś took the opportunity to remember her own debut in Gdynia ten years earlier. The winner was Marek Lechki, director of Erratum. Lechki thanked his co-workers – the actors and crew of the film. He emphasized the significant role of production manager Agnieszka Papiewska in the making of Erratum.

The award for Best Supporting Actor was presented by Frederic Chopin. “I don’t watch movies, especially those about me,” he said to the audience. The award went to Janusz Chabior for his role in Made in Poland by Przemek Wojcieszek.

The award for Best Supporting Actress went to Agnieszka Grochowska for her role in Trzy minuty. 21:37 (Three Minutes: 21.37). The award was presented by Anna Romantowska and George Sand. “I wanted to thank Krzysztof Stroiński –  it was a great honour to meet him and act with him,” said Grochowska. The award for Best Production Design, presented by Ewa Braun and Janusz Sosnowski, went to Wenecja (Venice) by Jan Jakub Kolski. It was accepted by Joanna Macha. “The director handed me the script over four years ago, inviting me on this journey,” said Joanna Macha as she thanked the film crew.

The next award was the award for Best Costume Design, presented once again by George Sand and Frederic Chopin. The award went to Magdalena Biedrzycka, who designed the costumes for Joanna.

The award for Best Screenplay was presented by Katarzyna Figura and Andrzej Bart, and the winning screenplay was Feliks Falk’s Joanna. Screenwriter/director Falk congratulated Andrzej Bart on his screenplay for Rewers (Reverse) and Michał Kwieciński, who came up with the idea for Joanna and produced the film.

The award for Best Director at this year’s gala went to Feliks Falk for Joanna. He accepted the award from Robert Gliński and Janusz Zaorski. The Special Jury Prize went to Janusz Majewski, director of Mała matura 1947 – the festival’s opening film.

The “Silver Lions” award, presented by Agnieszka Odorowicz, director of the Polish Film Institute, and Wojciecz Marczewski, went to Marcin Wrona, director of Chrzest (The Christening), and the film’s producers – Leszek Rybarczyk and Marek Rudnicki. “Several years ago, as a teenage boy, I got hooked on this and simply fell in love; not with a woman, and certainly not with a man, but with cinema. Tonight I feel that this love is mutual […]. I am very happy to be receiving this award from your hands – I believe that the way we are seeing the young generation enter our film industry is largely owned to you – Wojciech Marczewski, and to everything that is happening at the Polish Film Institute, which strongly supports young filmmakers. This is Agnieszka Odorowicz’s great claim to fame – the fact that we are here. I would also like to say that I would really like to see this type of thinking in other institutions, especially public institutions that should provide financial support to filmmaking,” said Marcin Wrona.