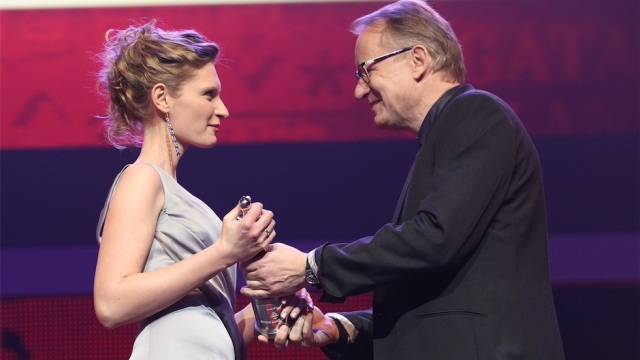 “The most important part of my job is meeting people, for which this was an excellent opportunity. I met nine wonderful colleagues – we have only known each other for two days, but we get along extremely well. Being selected as a Shooting Star is also a great responsibility, and I hope to live up to it and do something about it”, Buzek told journalists.

This was the thirteenth time that a jury of five prominent filmmakers selected ten most promising young European actors. They all must be fluent in English, have already established a successful career in their native country, be well-known internationally, and be under 35 years of age.

At the presentation, these young actors discussed their previous visits at Berlinale, their acting inspiration, the new possibilities arising from being a Shooting Star, and their upcoming projects.

Actors selected for the Shooting Stars project come to the Berlin Film Festival to participate in meetings with representatives of the film industry, casting directors from various countries, journalists, and audiences. Previous editions of SHOOTING STARS launched the international careers of many talented actors and actresses, including Rachel Weisz, Franka Potente, Daniel Craig, and Daniel Brühl.

Agata Buzek, the Polish Shooting Star 2010, talks to Marta Sikorska about her participation in the programme.

Agata, congratulations on your success!

How were you approached about participating in the Shooting Stars programme?

Poland could nominate one person. I am very happy that I received this nomination. The rest was up to the international jury that selects ten finalists from among all the European candidates. I was lucky to be selected as one of the ten.

How do you feel as a Shooting Stars?

It brings very positive emotions, feels nice. What’s important, I feel great with my nine colleagues – it’s a wonderful meeting with wonderful people. That’s probably the biggest surprise so far, and a good one at that, because you never know what to expect. And this group is better than I ever imagined.

Can you describe your typical day at the Berlin Film Festival?

I get up at dawn, start the day with a press conference and photo shoot. Then it’s one meeting after another: with producers, casting directors, directors. We move around the city, ending meetings by about 11pm. Monday will be an exception; we will finish the evening at about 2am.

Romanian actor Dragoş Bucur, also one of this year’s Shooting Stars, said at the press conference that being a Shooting Star does not make him feel like a star, but more like a person who just got an incredible opportunity for self-development. Do you think this initiative helps young European stars to develop their talent?

Above all, it is an amazing opportunity to meet people. I don’t expect it to be a life-turning moment, when all doors suddenly fly open and I instantly start working around the world. It’s never like that. It has never been like that. But I do think that we get to meet a lot of people, and that’s what’s most important about our job. Exchanging ideas, opinions, emotions… Sharing one’s needs and doubts. I guess in a way that helps all of us to grow. Naturally, if an acquaintance I made here results in a real job offer, that will be truly wonderful. But I don’t think that this is the key significance of this meeting here in Berlin.

How do you interact with the other Shooting Stars?

Over the past few days, we have been spending 16 hours a day together, so we have gotten to know each other pretty well. Just the other day, we told the make-up artist who was preparing us for a photo shoot that each of us comes from a different country. She said that we must have known each other for a long time, seeing how we get along so well. She was surprised when I told her that it had only been twelve hours since we all met! So I guess we come off as a tight group. Yes, I have met really wonderful people.

At tomorrow’s ceremony, you will receive a Shooting Stars award from one of the stars of world cinema. Do you know who will be presenting the award?

No, I don’t. That information has not been disclosed. Tomorrow will be a day full of surprises, but it will also be another very long day.

Thank you for your time.

The Shooting Stars Awards ceremony will take place at 7pm on February 15 at the Berlinale Palast.