"Ein Sommer" – Filming Has Started On The Polish Coast


The shooting of the German film “Ein Sommer” has begun at the beginning of October. The German-Polish film crew will work in the Tri-City and around Łeba for a month and a half. The production uses Polish 30% cash rebate scheme.

“Ein Sommer” is the story of Ebba, a woman who leaves behind her ordered life and marriage and sets off to appear in a bear costume in a circus travelling across the Polish coast. New experiences and romance with the circus director will make her wonder if she wants to get her husband back and return to her “old” life? As a bear, she will rediscover herself and her strength. 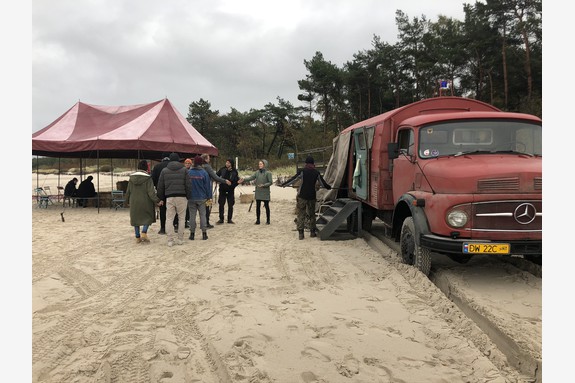 The film is directed by Dustin Loose, winner of the 2015 Academy Award for Best Foreign Language Film. The line producer in Poland is Pokromski Studio (“Maria Curie”, “Fuck For Forest”) on behalf of the German company Provobis from Munich. The majority of the 65-people crew are Poles. Radosław Zielonka (“Supernova”, “Spoor”) is responsible for the art direction, and Beata Rółkowska (“Disco Polo”, “Mug”) is a make-up artist. Clemens Baumeister is responsible for the cinematography. Polish actors Dymitr Hołówko and Ireneusz Kozioł will appear in the film next to European and German stars Iris Berben (“Rosa Roth”, “Buddenbrooks”, “Eddie the Eagle”) and Reiner Bock (“The White Ribbon”, “A Most Wanted Man”, “Wonder Woman”).

The entire filming is carried out in Poland, a total of 23 shooting days. The premiere is scheduled for summer 2020.

“Ein Sommer” is one of the first foreign projects that use Polish incentives. Expenses in Poland will amount to approx. EUR 675,000. The system enabling a refund of 30% of production costs (cash rebate) has been launched in February this year, so far 15 contracts with producers have been signed.