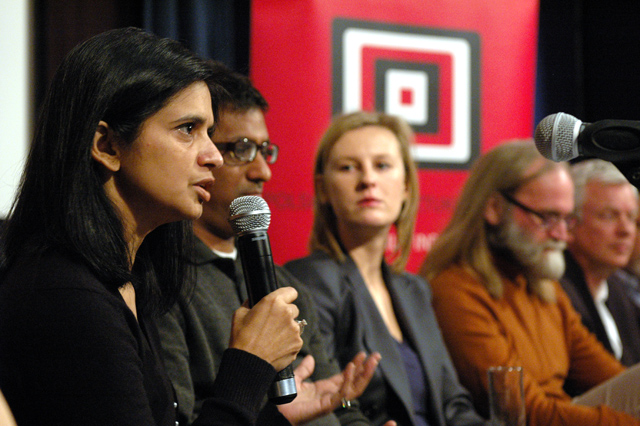 On October 15, a panel discussion and presentation of co-production opportunities between India and European countries was held at Warsaw’s Rejs cinema. This event was part of the Warsaw Script Meeting – the European segment of the Primexchange Europe-India workshop. The second session will be held next month at the Film Bazaar in Goa.

The conference was organized by PrimeHouse and the Polish Filmmakers Association, with support from the Polish Film Institute. Speakers included: Nina Lath Gupta, head of the National Film Development Corporation of India; Sunil Doshi, acclaimed producer, head of the NDTV Lumière film channel and distributor of world cinema in India; Phil Parker, Primexchange script advisor and author of “The Art and Science of Screenwriting”, and Frank Stehling, head of PrimeHouse, former Talent Campus board member. The Polish side was represented by Jacek Fuksiewicz, Izabela Kiszka-Hoflik and Robert Baliński of the Polish Film Institute, as well as producers Ewa Puszczyńska and Michał Kwieciński.

The meeting opened with a presentation of the Indian film market, prepared by Nina Lath Gupta. “India is a country that makes about 1,000 films each year in about 20 to 25 languages, (…) but it would be incorrect to say that it is one single composite, one whole. There are pockets of filmmaking in India, and there are multiple cinemas in India, films being made all over the country,” said the head of NFDC in her introduction. Nina Lath Gupta spoke about the history of the National Film Development Corporation of India, and about the company’s first co-production, which was the Oscar-winning film Gandhi (1982), directed by Richard Attenborough.

In 2007, the NFDC launched the film market and Film Bazaar India workshops in Goa. During Friday’s meeting, Nina Lath Gupta mentioned that quality art-house cinema in India is as difficult to promote as European cinema. “Indian cinema has obviously done very well in Poland. I wish I could as proudly say that Polish cinema has done equally well in India (…) I hope that the Primexachange workshop is going to be an opportunity, a first step towards facilitating collaboration,” said Gupta.

A point much emphasized during the discussion panel was how difficult it is to imagine making art-house films today without co-productions. Other key issues included seeking out exceptional talent from the large number of films in the world market, and about the future of co-operation between filmmakers from cultural backgrounds as diverse as Poland and India.

“There was a need to build partnerships at the stage of scripting, at the stage of pre-production (…), and to facilitate greater collaboration and greater interest not just in Indian cinema, but also in world cinema (…). This was the driving motivation behind setting up Film Bazaar,” suggested Gupta. As Primexchange participants stressed, a key issue is supporting

distribution, along with seeking partners for co-production.

Frank Stehling analyzed the film market in Europe and India. “The market share in Europe for European movies is about 25-35%, but if you look at the Indian market, 95% is Indian,” said Stehling.

Indian film and television producer Sunil Doshi encouraged participants to collaborate with the Indian film industry. He spoke of India’s openness to co-production and the financial stability of this art form in India. Polish panel participant and producer Michał Kwieciński said that India is a beautiful country to make European films, but was much less optimistic as he complained about the steep prices set by Indian film producers for foreign crews. “The prices are up to 10-20 times higher [than for domestic filmmakers],” said Kwieciński. “My question was, would I be able to find a co-producer for my project that would be on the same budget level as Indian films. (…) I have a very good film subject, I wanted to make the story of Maharajah Jam Sahib of Nawanagar (…) but it’s not commercial, and the name of the Maharajah is not very popular,” he added.

“For non-mainstream, art-house cinema in India (…), you can make a film for 100,000 dollars,” noticed Gupta. Sunil Doshi added that foreign filmmakers visiting India tend to increase production costs by buying first class tickets or hiring expensive lawyers. “That is not the case with Polish filmmakers,” assured Kwieciński. The discussion also touched upon the issue of whether it is possible to produce a successful film in India without local film stars, whose involvement in a project guarantees a multimillion audience. “Brad Pitt is not enough,” joked panel participants.

“Cinema is our universal language, as human beings. It’s the one thing that we’ve actually managed to bridge, as all of humanity. In fact, it is the only such thing, apart from war. (…) I’ve worked with people from all over the planet. What I discovered very quickly and a long time ago, was the fact that there are a number of stories that actually work absolutely everywhere; that one can do a certain shot that translates across every language. That the nature of story-telling has evolved in world cinema, is evolving, and will continue to evolve. The one thing i think about and I enjoy still working on is the fact that we borrow; creative people steal from each other all the time. When I was watching Hong Kong martial arts movies in the early 1980s in London, people would ask: ‘Why are you watching these films? What’s the point?’ And I said: ‘Because this is the future of cinema. We’re going to borrow this over the next 30 years.’ You watch action movies today, they have all these martial arts tricks in them.

If we look at Indian cinema and its use of dance and music to convey things – much of that has already been borrowed into modern dance films [in the US and Europe]. This is the level at which the collaboration culture is already going on. (…) We are working using the best universal language yet invented; any piece of cinema made anywhere in the world can be borrowed from, to make something original (…) What people look for is your uniqueness, your originality – they’ve seen a hundred action movies, a hundred romances, a hundred dance movies. What they want is for you to do a dance movie that is different. That brings your particular imagination to it. They want to see your action movie that brings in a particular take on the setting of that action or the way the action is conveyed (…) [We should] sit down and talk about this at the development stage; come up with interesting ideas and borrow like crazy (…) The language [we’re] working in is the language of cinema. It’s not the language of Poland, of Europe, of America, or that of India. It is the language of cinema. That is the power there,” said script advisor Phil Parker at the meeting.

Marcin Lech and Natalia Bolak of the Krakow Film Commission also attended the meeting. They discussed the major Bollywood production Mujjahir that is currently being filmed in Krakow. Filming is set to wrap on October 21.

The panel discussion was attended by participants of this year’s Primexchange workshop, which was held in Warsaw on October 13-16. 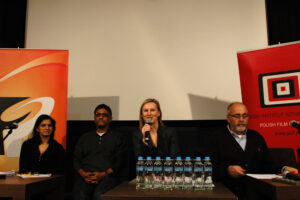 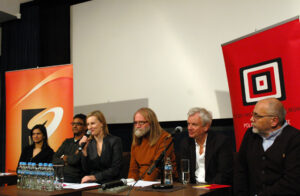 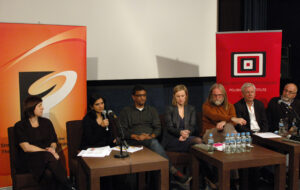 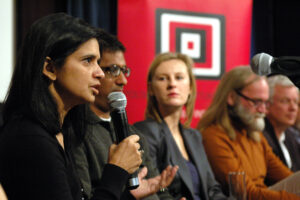 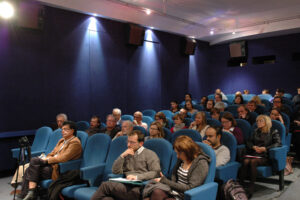