First session of Dragon Forum 2011 has come to an end 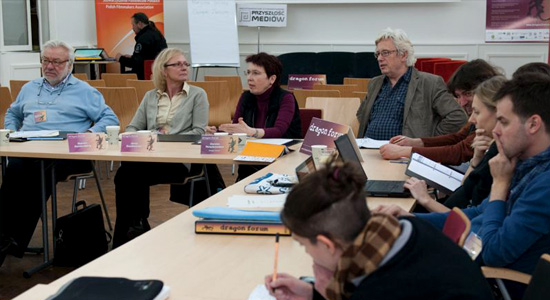 The first session of the 6th edition of Dragon Forum – International Academy of Document, ended on the 22nd of January with a screening of the DOK Leipzig award winner Vodka Factory by Jerzy Śladkowski. Over 40 filmmakers from several European countries worked on their projects during four days of workshops in Warsaw.

The first session of this year’s Dragon Forum, dubbed by organizers “screenplaying”, was dedicated to what and how will each project talk about. Workshop participants (one of participation requirements is that the project is presented by its director and/or producer) talked about ideas for their films during the daily group sessions as well as individual meetings with experts. During the January session, participants of Dragon Forum were tutored by five experts: director Jerzy Sladkowski author of the film Schizophrenia, a lecturer at the Wajda School Vita Żelakeviciute, Dragon Forum director and producer Dorota Roszkowska, film producer and script doctor Steven Seidenberg ,and the commissioning editor of Arte/ZDF Hans-Robert Eisenhauer (who commissioned, among others, Buena Vista Social Club by Wim Wenders).

The meet up provided young creators with an unique opportunity to confront their film plans with opinions of experienced experts from the international documentary film market. The authors presented their projects before a big group of peers and tutors, and hence confronted them with expectations of an audience as well as the experts of the genre. Already during the initial discussions fundamental questions were raised: why do you want to pursue making these particular filme? “Why should you be given the money from TV channels, regional funds or some other source? Consider this, there’s dozens of people here and enough money for one team only. Try to convince us to your idea!” said at one of the first meetings Jerzy Sladkowski, director of Two Rembrants in the garden, which opened last year’s 50th Krakow Film Festival.

“Aside from personal motivation the most important thing is that the filmmaker replies to some basic questions: What? How? For what purpose?” said the tutors. An observer at the Dragon Forum workshop could had a chance to see the entire process of a documentary film is being born. “What do you want to say? Why do you want to talk about this particular issue? Who is the protagonist of the film? Where will the action taken place? How are you going to tell the story?” – these are some of the first questions asked by teachers and fellow young filmmakers.

“I’m not an artist, I represent the commercial side of the industry. I’m interested in ensuring that many movies are made and that they tell diverse stories, but I do not tell stories myself. I must admit that for me numbers matter; for example how many people saw the film. I think you can be an artist, but you can also be a craftsman when making movies. I definitely am the latter (…)” said Steven Seidenberg during the first meeting. “You will surely be surprised, how many times during these workshops the tutors will differ in their opinions. Trust us and believe that it will be good for your film. All of us here are dealing with storytelling. The most important question is: how to tell these stories? We’re here to help you look at your story from different angles.” Steven Seidenber, who lives in Great Britain, is a producer for TV stations mainly in the Far East. He’s been involved with documentary production for over 30 years, he cooperated with, among others, Errol Morris during the realization of Short history of time about Stephen Hawking.

During 4 days of workshops dragon Forum tutors have helped develop 17 projects from Poland, Ukraine, Russia, Croatia, Hungary, Slovakia, Germany and France. They discussed matters such as polishing the projects, audiences for each film and even what film length should be chosen for each story and how to plan conversations with one’s subjects.

The workshops and one-on-one consultations were accompanied by Open Evenings, available to the public. Dragon Forum hosted guests such as Michał Klimkiewicz of Film New Europe, who talked about the operations of www.filmneweurope.com online service and how they could be utilised for the benefit of filmmakers. The public also had a chance to meet the director of What happened on the Pam Island, Eliza Kubarska, an alpinist who participated in Dragon Forum 2009 with project of this film. The editor of Arte/ZDF gave a very interesting lecture entitled “Docs Go Global. What does it mean for us?”. Eisenhauer presented current trends in TV documentary, illustrating them with fragments of the newest films made under his editorship. He stressed the growing presence and intensified promotion of documentaries on the Internet and was particularly enthusiastic about the phenomenon of “webdocs”. He also pointed out that several of the projects presented at Dragon Forum could have their extensions online.

Meeting with a representative of HBO Jerzy Dzięgielewski attracted great interest among the participants of Dragon Forum. Dzięgielewski produced films such as Escape from her by Marcin Koszalka and supervised production of the documentary Waiting for Saturday by Irena and Jerzy Morawski. The latter screened on HBO and had an audience comparable to that of western commercial productions showcased on this station. Dzięgielewski presented HBO’s strategies of commissioning documentary films in an interesting way. He estimated that each year he reads about 100 reads film scripts, about 5 of which go into production. Interestingly, films produced by HBO Poland often reach audiences of HBO in other Central European countries. This practice will also allow audiences in Poland to see for example the Hungarian film Invisible Strings – Talented Pusker Sisters directed by Ágnes Sós, produced by HBO in Budapest, based on a project developed at Dragon Forum 2009.

“We are very happy with the workshops, though towards the end we have realized that our concept of the movie already turned 180 degrees, thanks to the help of the tutors” – said Mirosław Skowron, one of the authors participating in Dragon Forum. – “We are particularly pleased about the one-on-one consultations with the tutors. They seemed very critical at first, but their insights proved very important to us” said Croatian producer Vanja Jambrović, presenting the project entitled Gangster of Love.

Next session of the International Academy of Document Dragon Forum 2011 will take place in Warsaw in April. This time workshops will revolve around the production process. Each of the 17 teams will have to show a project trailer and an improved version of the project treatment.