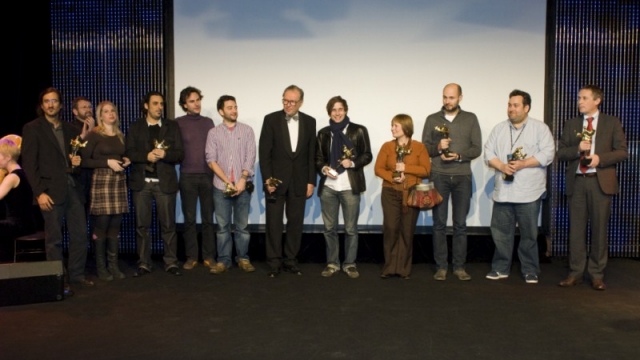 On November 27, Warsaw’s Kamienica theatre was the site of the 4th edition of “Grand Off” World Off Film Awards ceremony. Guests were welcomed by Emilian Kamiński, while the evening was hosted by Miłka Skalska and Conrado Moreno. Awarded filmmakers included Wojciech Kasperski. His film Otchłań (Chasm) received the grand prize for best documentary. The Polish documentary filmmaker accepted the award from the hands of Max Hansli, longtime president of UNICA.

895 independent films were submitted for competition. The final competition lineup was chosen by a selection committee representing the film industry from 28 countries. Awarded films will screen in 27 cinemas throughout Poland.

This year also marked the second time that the Cinema Art Foundation that hosts the World Off Film Awards decided to honour an acclaimed Polish director. The lifetime achievement award at Saturday’s awards gala went to Krzysztof Zanussi. The award was presented by Witold Kon – creator and head of the “Grand Off” festival. “What do we have in common, and what would I want you to have in common in years to come? It has to be your real, honest, true, not-for-sale, deep-from-the-heart non-conformism. That is the sign of independent film. Whether you make it in Hollywood, where something independent does get made from time to time, or even if you’re making it only for your closest friends. Please believe me, this comes from my lifelong experience. Being a non-conformist is easy when we’re young. But it’s important to remain one until we die; otherwise life loses its flavour, creativity stops making sense and becomes a simple menial task. That’s why I hope you all remain non-conformists and stay young at heart, even though our bodies might age,” said Zanussi at the awards ceremony.

Further details about the 4th “Grand Off” World Off Film Awards available at: www.grandoff.eu.