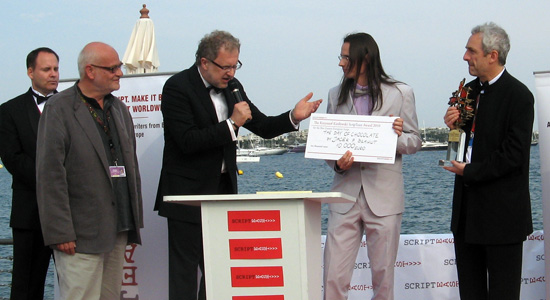 The winner of the Krzysztof Kieślowski Award for best script at this year’s fourth edition of the ScripTeast workshop was announced yesterday at the 63rd Cannes International Film Festival.

The ScripTeast Advisory Board (Sandy Lieberson, Antonio Saura, Manfred Schmidt, and Dariusz Jabłoński) decided to award Jacek Piotr Bławut for a script co-written by Anna Onichimowska and Jacek Piotr Bławut, based on Anna Onichimowska’s novel “Dzień czekolady” (“Day of Chocolate”). Special Mention was given to the script “Memories of My Heart” by Irena Hejdova from the Czech Republic.

Jacek Piotr Bławut is a graduate of the Andrzej Wajda Master School of Film Directing and the Wrocław Academy of Fine Arts. He co-wrote scripts to such films as Jeszcze nie wieczór (Before the Twilight; also credited as assistant director), Sen motyla, and Hotel potworny. He also works on documentary film projects as director of photography.

ScripTeast is organized by the Independent Film Foundation, supported by the European Union MEDIA programme, the National Centre for Culture (NCK), the Polish Film Institute, and Apple Film Production, and executed in co-operation with the European Film Academy and the Producers’ Network, ACE, e-Talenta, and the Berlin, Cannes, and Karlovy Vary film festivals.

For further details about the award winners and the ScripTeast programme please visit: www.scripteast.pl.