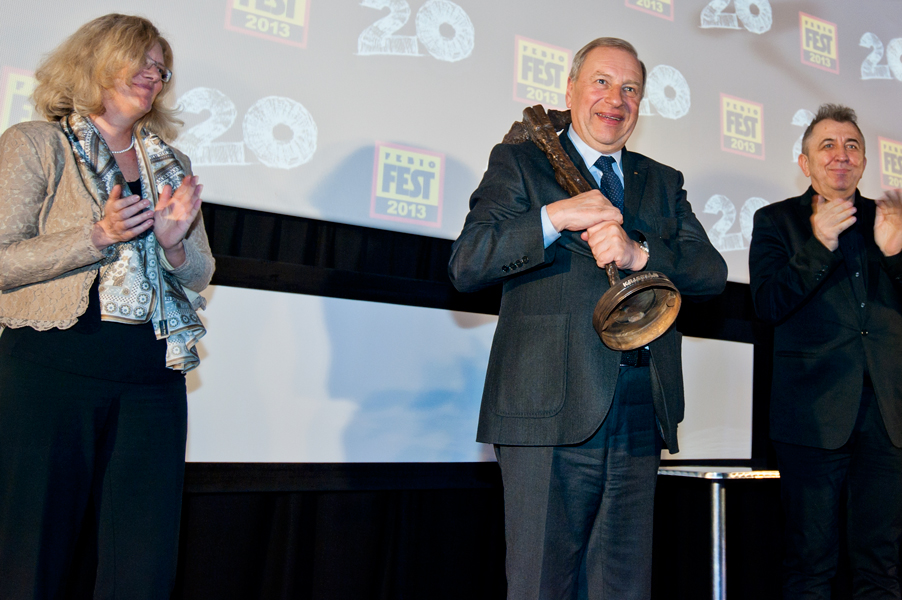 On March 17, Jerzy Stuhr received an award for lifetime achievement and contribution to world cinema at the 20th FebioFest International Film Festival in Prague.

A retrospective of works by Polish actor and director Jerzy Stuhr was featured in the lineup of this year’s FebioFest festival within its showcase of world cinema. FebioFest screens a selection of Jerzy Stuhr’s filmography both as an actor (Wodzirej / Top Dog by Feliks Falk and Seksmisja / Sexmission by Juliusz Machulski) and as a director (Pogoda na jutro / Tomorrow’s Weather, Historie miłosne / Love Stories). The screenings are preceded by Q&A sessions with the filmmaker.

Jerzy Stuhr is one of the most recognized Polish actors in the Czech Republic. “There are few filmmakers in our region who deserve this award more than Jerzy Stuhr,” said festival programming director Hana Cielova, adding that Stuhr is a rare example of an exceptional actor who became an equally exceptional director. “I really like it here. I know many festivals, but this one has a very youthful atmosphere. For a director and actor of my age, it is especially important to remain in touch with young people,” said Jerzy Stuhr, emphasizing that FebioFest makes him feel like he is among family.

Another Polish Filmmaker Recognized in the Czech Republic

The Kristiana award for lifetime achievement was presented at FebioFest for the third time. Last year, this award went to Agnieszka Holland, whose accomplishments in the world of filmmaking are presented this year at a biographical exhibition organized by the Museum of Cinematography in Łódź and co-financed by the Polish Film Institute. The exhibition is on display at the CineStarAndel festival venue.

“The position of Polish cinema in the Czech Republic has been very strong in recent years,” says Piotr Drobniak, director of the Polish Institute in Prague. “It is no longer represented only by such artists as Andrzej Wajda and Krzysztof Kieślowski, but also by young filmmakers such as Borys Lankosz, Marcin Wrona or Jan Komasa. This is supported by the fact that, in addition to a number of film awards, in the last twelve months we have released four Polish films in Czech cinemas,” says Piotr Drobniak, adding that several more Polish films are set for theatrical release in the Czech Republic.

Further details about the 20th FebioFest in Prague available at: www.febiofest.cz.