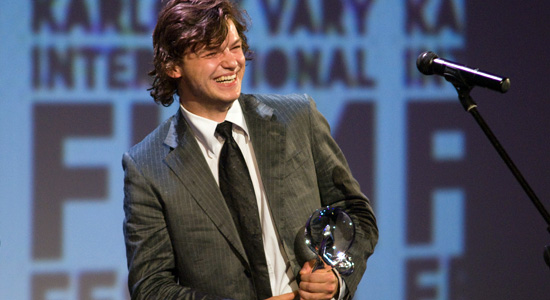 The 45th Karlovy Vary International Film Festival drew to a close. The Crystal Globe awards were presented at the closing ceremony.

The Polish feature Matka Teresa od kotów (Mother Teresa of Cats) was recognized for its male leads. The Best Actor Award went jointly to two young actors: Mateusz Kościukiewicz (born 1986) and Filip Garbacz (born 1994). They were awarded for the roles of Artur and Marcin – two brothers who murder their own mother.

The award was accepted by Mateusz Kościukiewicz and film producer Sławomir Rogowski, who accepted it for the absent Filip Garbacz.

“Being here is a great honour. This award is so heavy… I would like to thank Paweł Sala, the director. I love this place,” said Mateusz Kościukiewicz.

“Yes, the award is indeed heavy,” agreed Sławomir Rogowski. “As you can see, unfortunately I’m not Filip Garbacz. He is 16 years old. I spoke to him earlier today. He is in Denmark, shooting his next film. Once again, a big thank you to Paweł. He is our hero tonight!”, added Rogowski.

The gala was launched by a screening of one of the Karlovy Vary festival promo films – a funny short film featuring John Malkovich. Malkovich received the award for contribution to world cinema in 2009. This year’s award for exceptional contribution to the development of world cinema went to Russian director, actor and producer Nikita Mikhalkov.

The Audience Award, presented by a representative of the “Pravo” daily newspaper, went to the Danish feature Oldboys by Nikolaj Steen.

The winner of the East of the West competition for films from Eastern Europe was the Romanian feature Aurora by Cristi Puiu (director and male lead). Special recognition in this section went to The Temptation of St. Tony by Velko Ounpuu, a co-production between Estonia, Sweden, and Finland.

After the East of the West awards, the audience watched a film about the history of the Karlovy Vary film festival. The film featured Krystyna Feldman, winner of the acting award in 2005 for her role in Mój Nikifor (My Nikifor).

After the documentary awards, the audience in the large screening room of the Thermal cinema had an opportunity to see a short montage of films and photographs, dedicated to filmmakers that passed away over the last year. One of the mentioned actors was Zbigniew Zapasiewicz.

After the screening, the special recognitions of the Main Competition jury were announced. They went to Russian director Dmitri Mamulla, creator of Another Sky (Drugoje nebo), which also won the Ecumenical Jury Award, and to Fardin Saheb Zamani, director of There Are Things You Don’t Know (Chiz-haie hast keh nemidani).

The award for Best Director went to FAMU graduate Rajko Grlic, director of Just Between Us (Neka ostane medju nama). The film also won the Europa Cinemas Label award. The FIPRESCI award went to Hitler in Hollywood by Frederic Sojcher.

The Grand Prize of the 2010 Karlovy Vary International Festival went to the Spanish feature The Mosquito Net (La mosquitera) by Agusti Vila.

This year’s edition of the Karlovy Vary festival was attended by over 11,000 accredited industry members. Approximately 120,000 tickets were sold to the festival’s 380 screenings.

Next year’s edition of the Karlovy Vary International Film Festival will last from July 1 to July 10, 2011.