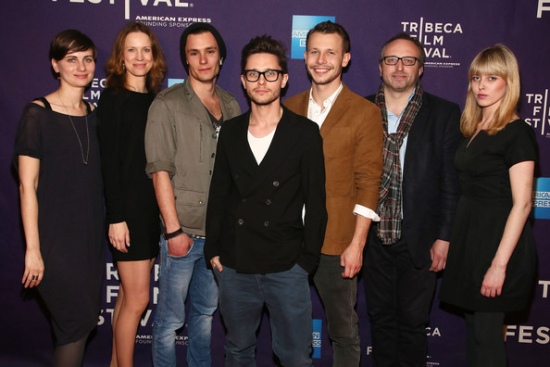 April 18 marked the world premiere of Tomasz Wasilewski’s latest film Płynące wieżowce (Floating Skyscrapers) at the Tribeca Film Festival in New York City. The film was selected as one of 14 feature films showcased in the Viewpoints section of the festival.

The film’s main protagonist Kuba (Mateusz Banasiuk) is a young man, living with his mother (Katarzyna Herman) and his girlfriend Sylwia (Marta Nieradkiewicz). On the surface, Kuba’s life seems organized and stable. He is living with a girlfriend whom he loves, and studying at the local physical education college. One evening at a party, he meets Michał (Bartosz Gelner). An emotional bond forms between the two men. Kuba suddenly finds himself fascinated with another man. Terrified by the emotions that begin to engulf him, he cannot find himself in these new circumstances. His seemingly stable and strong relationship with Sylwia becomes complicated.

“Wasilewski confronts each character in a raw matter but he does it so effectively that he transports the viewer to the characters’ world. The film is one of the most moving, poignant and magnetic films at the Tribeca Film Festival thus far,” writes Francisco Salazar in his review of Floating Skyscrapers. In a review for Indiewire, Gabe Toro emphasizes that Wasilewski makes his story extremely appealing from a visual standpoint, which suggests that he is only one step away from creating a truly remarkable work of art.

A Film About Loneliness

Płynące Wieżowce (Floating Skyscrapers) is a feature film that touches upon the issue of loneliness in the contemporary world. The film’s protagonists represent two generations whose fates are closely woven together. Each of them is an individual being, struggling to find their own identity. As they discover their story, they learn how to live with another human being, despite their fears and reservations.

14 feature films and eight documentaries were selected by the festival programmers. Płynące wieżowce (Floating Skyscrapers) is the only film from Central and Eastern Europe in this lineup. Tribeca screenings of the film are scheduled for April 19, April 26 and April 27.