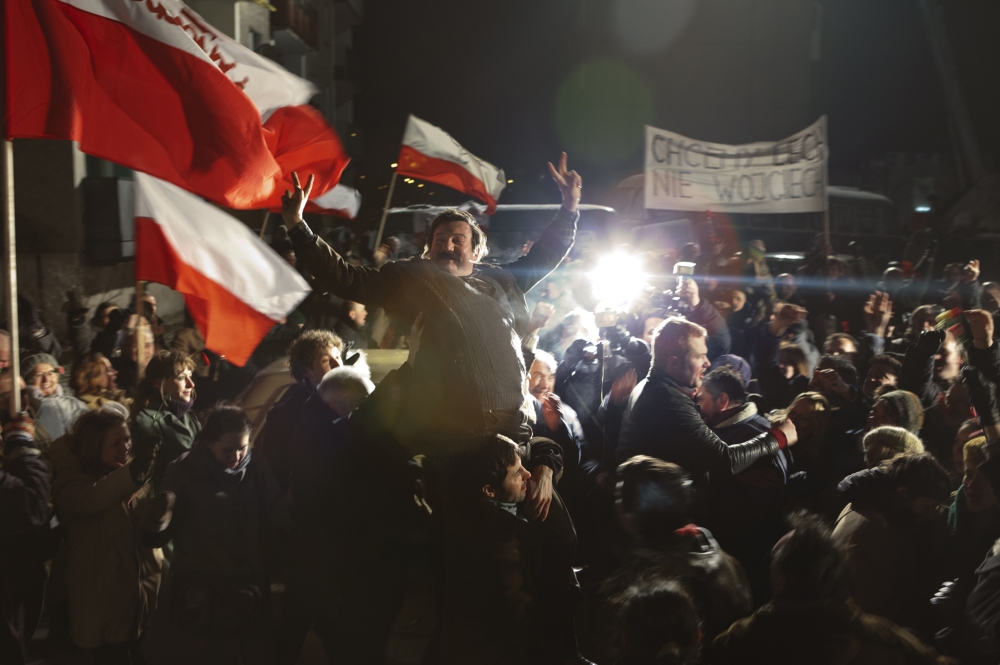 Rounding Out the Trilogy

Alison Smale notes that this film rounds out Wajda’s trilogy “on the Polish worker’s journey from Stalinism to freedom”, following Człowiek z marmuru (Man of Marble; 1976) and Człowiek z żelaza (Man of Iron; 1981). “[This] film, which opened in Poland on Oct. 4 and [was] shown at festivals including Venice, Toronto, Rio de Janeiro and London this autumn, drew the second-biggest box office this year on opening weekend in Poland. The film has affirmed the director’s stature and ability over decades to give voice and life to Poland’s tortured history. […] For the many who remember the days of dread and wonder during the courageous struggle of Poles against communism, there was fear that Mr. Wajda would show too many of the warts and not enough of the bravery and sheer stubbornness that propelled Mr. Wałęsa,” writes Alison Smale, noting that the director skillfully portrayed the life of Lech Wałęsa between 1970 and 1989.

“It’s a brave title, and reminds us of the moment when we were all together,” says director Borys Lankosz in a quote used in the New York Times article. Andrzej Celiński, politician and Wałęsa’s former colleague notes that the film shows that in those days “people felt as if it was all ‘us’ and no ‘them’.”

Playing a Legend, Directed by a Legend

Alison Smale also quotes Robert Więckiewicz, who played the central role of Lech Wałęsa. In an interview, Więckiewicz said that “he was ‘playing a legend, directed by a legend’ in a country with ’38 million experts on Wałęsa’.” She also writes that the six months of shooting and endless script and editing changes had helped Więckiewicz to understand the importance of looking back. Robert Więckiewicz also said that “in Polish history […] ‘there are very few moments that one can really be proud of’,” and emphasized that Andrzej Wajda’s film helps “to remind the world that […] the toppling of communism throughout the Soviet bloc ‘started in Poland, that Poland was first, before the fall of the Berlin Wall’.”

Unexpected Element of the Movie

Alison Smale also writes about “one of the more unexpected elements of the movie,” which to her is Danuta Wałęsa, who was played in the film by Agnieszka Grochowska. “As the movie was being made, she emerged from her husband’s shadow with a memoir,” notes Smale, going on to describe a memorable scene in the film, in which Danuta Wałęsa is strip-searched at the airport upon returning from Norway, where she had collected the Nobel Prize for her imprisoned husband.

In the final words of her article, Alison Smale quotes the opinions on the movie of viewers in their late twenties and early thirties, for whom the film served as a way to realize “how little [they] knew about the strikes” and helped them “understand how [their] parents had lived in the 1980s,” but also noticed “how much we have achieved in Poland in the last 30 years.”

The complete text of Alison Smale’s ‘Solidifying Poland’s Legends With Film’ article is available at the following link: www.nytimes.com.