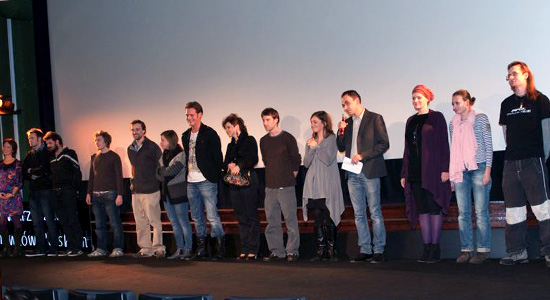 Marcin Sauter’s documentary film Na północ od Kalabrii (North of Calabria) had its premiere on November 16 at Warsaw’s Kultura cinema. On November 19 the film will be released in Warsaw, Krakow, and Poznan. Later it will screen throughout Poland.

The audience was welcomed by Katarzyna Ślesicka of the Andrzej Wajda Master School of Film Directing and Jacek Bromski, president of the Polish Filmmakers Association. Andrzej Wajda was a special guest at the premiere.

Representatives of the community of Chełmsko Śląskie, where North of Calabria had been filmed, were also present at the screening.

The director said a few words at the premiere. “I would like to give a special thanks to the crew; this film more than any other owes a lot to the crew – it was up to them to build the atmosphere that is a key element of this film,” said Marcin Sauter, as he invited his collaborators to join him on stage.

During the pre-screening presentation, a lot was said about the festival successes of North of Calabria; after screening at the Krakow Film Festival, the Polish documentary was featured as an insert with Dox Magazine. The international premiere of Marcin Sauter’s film took place at this year’s edition of the DOK Leipzig festival, where the film won the ver. di Trade Union Award and the Ecumenical Jury Award. The film also received Special Mention of the Jury at the “Flahertiana” International Documentary Film Festival in Perm.

Sauter’s documentary is the first film produced and distributed by the Andrzej Wajda Master School of Film Directing to have a wide theatrical release. The film was co-produced by the Munk Studio, while the Polish Filmmakers Association teamed up with the school to handle the film’s distribution.

We spoke to director Marcin Sauter before the premiere of his North of Calabria.

Polish Film Institute: What is so unique about Calabria that its name would appear in the title of a Polish film that takes place in Poland?

Marcin Sauter: The name comes from the fact that one of the film’s characters has something to do with Calabria. The beautiful town of Chełmsko Śląskie has to be somehow placed; I hope that after the premiere some Italian filmmaker will call his film South of Chełmsko Śląskie, or South of Bydgoszcz, for example.

Why do you think North of Calabria is appreciated and often awarded abroad? What does your film say about the Polish people? Doesn’t it present us as rather cheerful people?

I certainly hope that this comes from the fact that the film talks about the good side of life, which is rare these days. I think people need such positive stories in other countries as well.

How did you choose the town in which to film your project?

We visited dozens of towns; when we stopped in Chełmsko, we saw this amazing and beautiful place. There was no point in looking any further.

To what extent is the film a documentary, as opposed to your and your crew’s interference with the life of the town?

It is by all means a documentary. The actors were not directed, they simply received tasks to perform. The characters were filmed based on the qualities they presented in their private life. Documentaries have been made like this for ages, this is nothing new. What I wanted from the beginning was for the audience to know that the film was being shot. The documentary truth was to come out of what was happening between the crew and the residents of Chełmsko.

Let’s talk about the crew. Does the Paladino team still exist? What projects, aside from your own productions, do you collaborate on?

Paladino exists and is doing better and better, though it did see some minor changes in its team. Piotr Stasik is no longer with the team, whereas Michał Marczak joined. We operate the same way we did before – each of us makes films, and we help each other out – whether by working on each other’s films, or just listening to our colleagues’ advice. The films are what’s important, they’re what gives us drive for our common actions. We share a similar passion and view of the world. Each of us recently showed a new films, and we’re already working on new projects. Thierry Paladino made La machina, Michał Marczak made his Koniec Rosji (At the Edge of Russia), Maciej Cuske made his Pamiętaj abyś dzień święty święcił (Observe the Sabbath and Keep It Holy) in the “Decalogue after the Decalogue” series. We also share other really advanced film plans, which I cannot reveal at this point.

North of Calabria previously screened in Poland at the Krakow Film Festival. What made the film work up to a theatrical release? Why do you think Polish documentaries so rarely have an opportunity to reach domestic audiences?

I don’t know, unfortunately. But I hope this will change soon. At documentary film festivals I see how people experience documentaries, how important they can be. Unfortunately, I have no idea about the inner works of film promotion.