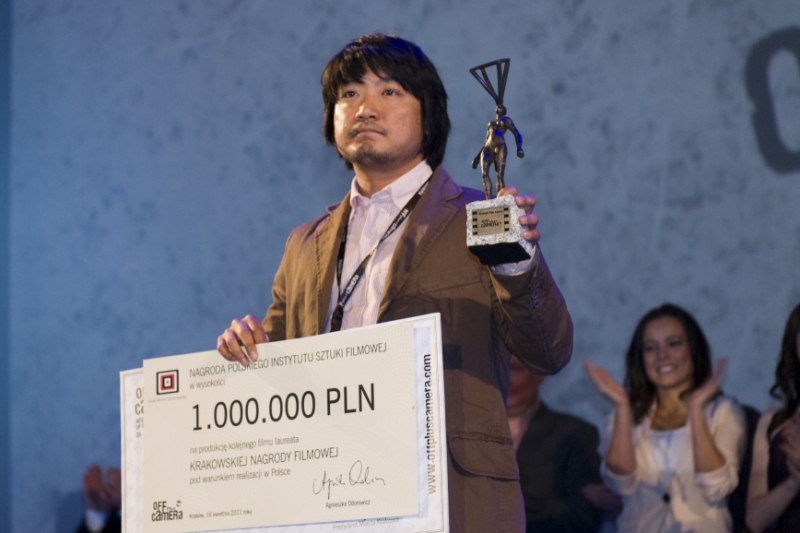 The fourth edition of the Off Plus Camera international independent film festival has drawn to an end. The Krakow Film Award went to Korean filmmaker Park Jung-bum, director of Musan il-gy.

Eleven films from around the world competed for the Krakow Film Award, the top prize in the festival’s Main Competition. Jury members Jerzy Skolimowski (president of the jury), Jill Sprecher, Saverio Costanzo, and Elvis Mitchell, awarded the Korean production Musan il-gy, directed by Park Jung-bum. The feature-length debut of the South Korean filmmaker discusses the issue of immigrants from North Korea and their difficult financial situation in South Korea, arising from the fact that they remain outsiders in society.

Agnieszka Odorowicz, general director of the Polish Film Institute, said that as part of the Krakow Film Award, the director is to receive 1 million PLN from the Polish Film Institute as financial support for his next project, if it were to be filmed in Poland. Last year’s OPC winner, Czech filmmaker Marek Najbrt, is currently working on his latest film, which also includes Polish themes.

The Max Klezmer Band and Maciej Maleńczuk performed at the awards gala. After the concert, the audience at the Kijów cinema welcomed another special guest of the festival – actor Richard Jenkins. Minister of Culture Bogdan Zdrojewski had an equally warm welcome. “I would like to thank everyone, and congratulate everyone […]. I’m especially glad to see Polish cinema being so well represented at this event,” said Minister Zdrojewski, promising financial support for following editions of Off Plus Camera.

This year marked the first time the award of the International Federation of Film Critics (FIPRESCI) was presented at Off Plus Camera. Jury members Tomislav Sakic (Croatia), Ronald Bergan (United Kingdom), and Krzysztof Kwiatkowski (Poland) recognized Sala samobójców (Suicide Room) by Jan Komasa. “We decided to award the most original of the eleven films in Main Competition; this film discusses the most current issues, and is most ambitious,” said Ronald Bergan, who writes for The Guardian, as he presented the award. “Thank you very much for this beautiful award, it is Suicide Room‘s first award,” said Jan Komasa at the ceremony. The director thanked three people, without whom the film would never have been made: producer Jerzy Kapuściński, general director of the Polish Film Institute Agnieszka Odorowicz, and Minister of Culture Bogdan Zdrojewski.

The Audience Award, presented by directors of the Off Plus Camera festival Anna Trzebiatowska and Szymon Miszczak, went to Eliza Kowalewska, who directed the film Heniek.

The jury of the Polish Feature Film Competition Rose McGowan (president of the jury), Roger Christian, Ellen Chenoweth, Kim Dong-Ho, and Andrei Stepanovich Plakhov, decided to recognize Marcin Wrona’s Chrzest (The Christening) among the ten competition titles. “As I watched this film, I felt that it has what in Spanish we call cojones,” said Rose McGowan at the awards press conference as she spoke about The Christening. The award was accepted jointly by producer Leszek Rybarczyk and director Marcin Wrona. Wrona also received the Special Award of the Catalyst Holding Group – a trip to the 2012 Sundance International Film Festival. “This festival promotes an uncompromising way of thinking about film without looking back at what others are doing […]. I think that this financial award will enable me to remain independent,” said Marcin Wrona as he accepted a cheque for 100,000 PLN.

Awards were also presented to filmmakers who showed their works in the Take It & Make It competition for amateur filmmakers.

List of awards presented during Saturday’s gala at the Kijów.Centrum cinema in Krakow:

Take It & Make It Competition: