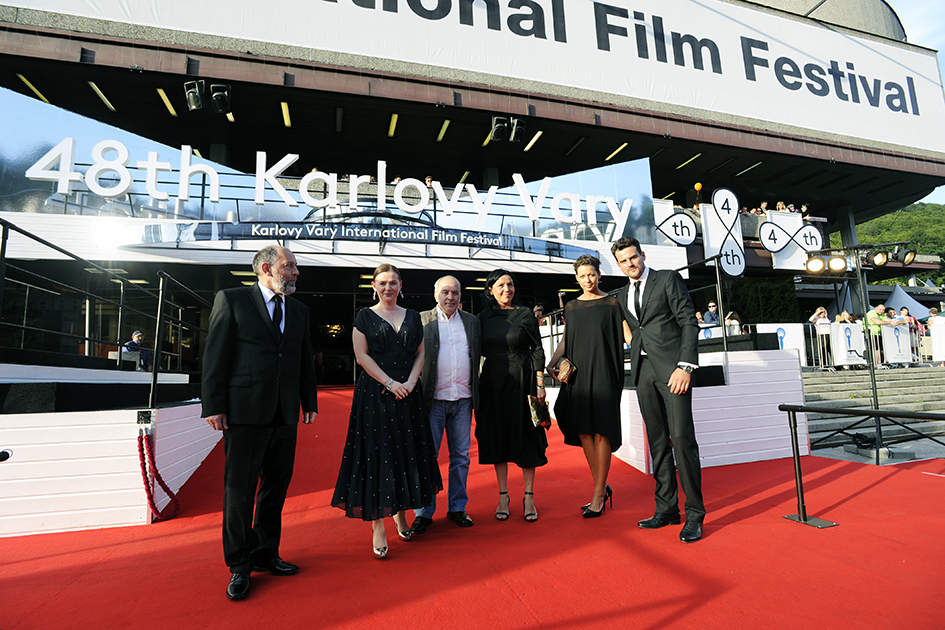 The creators of Papusza. Photo courtesy of the Karlovy Vary IFF

July 1 marked the press conference of Papusza, a film by Joanna Kos-Krauze and Krzysztof Krauze, at the 48th Karlovy Vary International Film Festival. Later that day, the film, co-financed by the Polish Film Institute, had its world premiere at the Karlovy Vary festival, screening in Main Competition.

“A World That Can No Longer Be Recreated”

“We searched for the right language to bring this story to life; black&white gives the tale a sort of emotional certainty,” said Joanna Kos-Krauze at the press conference. “We were inspired by photographs from the 1950s and 1960s. We wanted the images to be beautiful, because this is a world that can no longer be recreated – a shtetl in 1950s Poland. It is up to the audiences and the critics to decide whether this was the right approach,” she added.

Director Joanna Kos-Krauze emphasized a significant duality: the film had two directors, two DPs, while Papusza herself had two men in her life. At the press conference, journalists praised the excellent results of artistic cooperation of two cinematographers, Krzysztof Ptak and Wojciech Staroń. “The final outcome is incredibly cogent. I have never seen the Romani community depicted in such a credible way in film,” said one of the journalists. Joanna Kos-Krauze discussed how Papusza was the joint effort of a number of acclaimed artists, and noted that the final image is somewhat balanced as a result of the creative differences that were bound to arise among such a large number of creative individuals. The director also recounted the key role of post-production and special effects.

While discussing their cooperation with the cinematographers, Kos-Krauze also noted that the lack of close-ups in the film was an artistic choice. “This required real psychological endurance. And a lot of prep work. Here we have Bruegel-esque frames; [we believed that] this Romani story would create framing tension […]. Papusza’s poetry wouldn’t go with fast cutting; it’s a completely different mode of storytelling.

One of the questions asked of the filmmakers was about Papusza’s recognizability in Poland. “She is well-known; her life story was once seen as a sort of legend of the cursed poet. Much like Nikifor, actually. We did our research; we read everything we could find about her, but initially we had difficulty finding the right language to tell this story. It was Jan Kanty Pawluśkiewicz who took Papusza’s poetry to a higher level […]. Papusza is an emotive figure; there are those among the Romani community who are proud of her, and those who despise her,” said Joanna Kos-Krauze. Film critics emphasized that the film’s greatest value lies in the fact that it portrays the Roma community not in the context of a social issue, but in a cultural one.

There was also a question about the use of the Romani language in the film. The actors emphasized the difficulty of learning a new language in just a few months. “It was not easy to act using the Romani language. It was a year’s worth of learning […]; when I received praise from true Romani, that was my watershed moment,” said Zbigniew Waleryś, who played the part of Papusza’s husband.  ”Ficowski, author of the first Polish-Romani dictionary, was regarded by the Romani community as a traitor of sorts, who brought the Romani culture to the gadjos,” said Antoni Pawlicki, who played the role of Ficowski. As Joanna Kos-Krauze said, “we had to make this film in the Romani language, in the dialect of the Polish Romani community; language issues constantly had to be consulted. This film also has value in terms of linguistics. We hesitated about making this film in the Romani language, but on the other hand, enough with the making of Holocaust movies in English.”

There were also questions about the most difficult aspect of production and about the distribution plan for Papusza. “The film will have a wide distribution. In terms of artistic vision, Adam Mickiewicz once called this type of storytelling ‘pictured words’,” said producer Lambros Ziotas. “We had the most relative difficulty with the logistics; organizing transport for the Romani wagons. But thanks to discipline and good organization, we were successful. This film was easy to make, because it had been well-prepared by the creative team,” he added. The filmmakers also emphasized the great effort of Next Film, the film’s distributor.

When asked about how the Romani people perceive Papusza today, Joanna Kos-Krauze said: “We already held a screening for the Romani community in Poland. Some of them are proud of Papusza’s legacy, others consider her a traitor. But we hope that we managed to create an authentic portrait [of this community]. The Romani people are among those nations who suffered the most during the Second World War. Later they were subject to forced settlement, and in 1989, they suffered the most loss in the political transformation. Their culture remains their greatest asset, while education is their future.”

“I believe that young Romani people will learn about her mainly from our film,” said Jowita Budnik, who played the lead role in the film.

Guests at the Premiere Screening of Papusza

Before the film’s evening premiere screening, also attended by the filmmakers, there was an event honouring the eleven Polish films and co-productions screening in Karlovy Vary. Guests included Katriel Schory, director of Israeli Films, Berlinale programmer Nikolai Nikitin (who on that day also held a brief presentation of the Sofa programme, co-organized and co-financed by the Polish Film Institute, the City of Wrocław and the New Horizons Association, which will have its first edition in Wrocław in September this year), Renate Rose, managing director of European Film Promotion, Karel Och, Artistic Director of the Karlovy Vary IFF, and programmers of several international film festivals, including the Cannes Critics’ Week, Rotterdam, Gothenburg, as well as Polish jury members, including Krzysztof Gierat, head of the documentary competition jury, and Piotr Mularuk, East of the West competition jury member.