On the Set of "Warsaw" 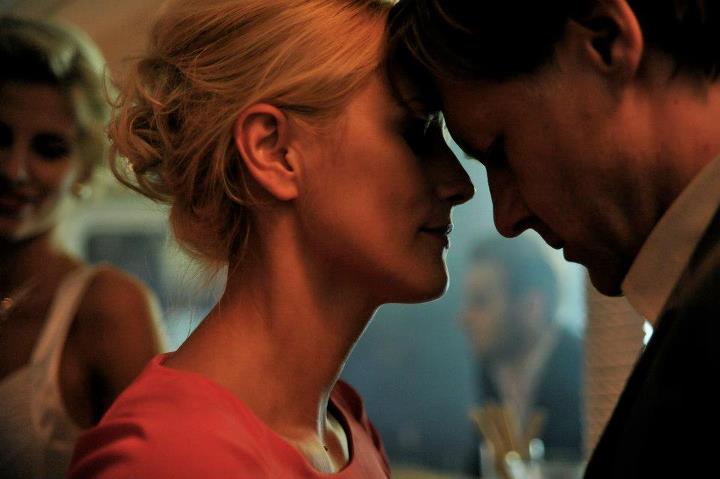 The banks of the Vistula river were transformed for a few nights into the set of the Polish-Norwegian co-production Warszawa (Warsaw), directed by Leiv Igor Devold. The film features performances by Polish actors Andrzej Chyra and Sylwia Juszczak.

This short feature, written by Runne S. Thorud, tells the story of one night in the life of Robert, a 30-year-old Norwegian yuppie who is at a crossroads after the death of his wife, and Janina, a Polish prostitute. Their paths cross unexpectedly, and this single night will change their lives forever.

Leiv Igor Devold formed a cast of acclaimed Polish and Norwegian actors. The top star in the film is its leading man Mads Ousdal – though not widely known in Poland, Ousdal is an acclaimed Scandinavian artist with an extensive filmography. In the words of Warsaw cinematographer Szymon Lenkowski: “Mads is the Norwegian equivalent of Janusz Gajos. The Norwegian crew treats him with the greatest respect.” There is no doubt as to popularity and artistic accomplishments of Andrzej Chyra, who plays the role of Aleksander. Director Leiv Igor Devold had an opportunity to see a unique side of Chyra: “I had classes with Andrzej during my studies at the National Film School in Łódź, our paths crossed in acting class, when I was in my second year. Of course I had seen Dług (The Debt), Komornik (The Collector), and many more of his films. He is an extraordinary actor and I am very glad that he agreed to play in my film,” says Devold.

Sylwia Juszczak, playing the role of Janina, is an actress who has played a number of parts in film and television. On the set of Warsaw, Juszczak had to play the difficult part of a prostitute: “I play a high-end call girl, who is going through a difficult period in her life. She is a very sensitive person, contrary to what is often said of prostitutes. She is not the prostitute type. This is not an obvious character, she is very complex. The problem touches upon the world of prostitution, but it is […] one night in her life, a mere fragment of her inner life. I found that very interesting.”

Poland’s Capital Serves as Backdrop for the Story

Another featured protagonist of the film is Warsaw itself. Serving as a backdrop for the story that takes place, the city is shown from an unusual side. “We found several locations that were very appealing visually. One of our locations is a barge on the Vistula river, with a view of the National Stadium and the palatial Poniatowski bridge,” says Szymon Lenkowski. “We chose a piece of Warsaw that most Warsaw residents don’t get to see every day. We show the Warsaw that is beautiful and metropolitan, but also the Warsaw that is hidden, unknown. Warsaw from the perspective of the river. Most people living in Warsaw today move around the centre of the city, seeing the banks of the river as something relatively difficult to reach, distant and uncharted territory. But our world does its best to open up to the river. We move around under its bridges and overpasses, while keeping the context of the film confined to the river barge. The Warsaw that we show is unusual, but very interesting and definitely worth showing,”

On his part, Leiv Igor Devold, as a Polish-born Norwegian film director, makes no secret of his deeply personal relationship with the city that serves as a set for his film. “I feel that I have strong ties with Warsaw; I was born here and I always say that my soul is Polish. But I can see a great difference between Norway and Poland. They are completely different worlds. I wanted the main character to be completely detached from his environment. I was a little inspired by Frantic, where the main character finds himself in a strange place and tries to deal with a problem. The protagonist gets pulled into a strange and foreign world, where sometimes it can be easier to make difficult decisions and become involved with certain people, with whom in your own town – so familiar and comfortable – you would never become involved with. Where you would never go as far as you go in this unfamiliar territory. When you’re abroad, you tend to do things that you would never do at home. […] In its subject matter, Warsaw is not too personal for me. But it is a new challenge and it will certainly take me to the next level. It’s important to keep accepting new challenges.”

The Inner Life of the Protagonist

The filmmakers emphasize that the film’s short form, as well as its setting in the reality of Warsaw, will not deprive the story of its mysterious aura and metaphysical feel. “The director and I are looking for an optimal way of showing the inner life of the protagonist in a way that, on one hand, would touch upon magic and penetrating the human soul, and on the other hand, something that wouldn’t become a form of imitation or kitsch,” says Szymon Lenkowski. It is a very difficult challenge. I myself am curious to see the outcome of our attempts to combine these two worlds: the realistic drama that takes place in the lives of our characters, and their slightly surreal inner life. I am very curious to see the final outcome.”

A Co-Production Between Norway and Poland

Leiv Igor Devold is a graduate of the Directing Department at the National Film School in Łódź, and a lecturer at the University of Oslo and the University of Lillehammer, among others. He is also a short and documentary film director.

The short feature Warszawa (Warsaw) is a co-production between Norwegian company Aurora Film and Polish company No Sugar Films. Warsaw marks the first international project for No Sugar Films. The film is co-financed by the Ostnorsk Filmsenter Norwegian Regional Film Fund, while Heliograf, serving a Polish co-producer, provides equipment necessary for the production stage.

The premiere of Warszawa (Warsaw) is scheduled for spring 2013.