Polish animations co-financed by the Polish Film Institute “Acid Rain” and “Portrait of Suzanne” were among the films that can apply for an Oscar® nomination in the category of Best Animated Short Film 2020. The minority co-production “The Kite” also has a chance to be nominated.

The film takes place somewhere in Eastern Europe. The young run away from home, as far as possible from the gray town. The initial excitement of hitchhiking goes down as she lands on the outskirts of the city in the middle of the night. On the bridge she notices a figure balancing dangerously on the rail. This is how she meets Chudy, a bit unstable freak. Chudy lives in a motorhome, which he drives, not necessarily dealing with legal errands. Young decides to get on with Chudy. Their common path leads to increasingly stranger regions, and an unnamed bond quickly forms between them.

“According to early predictions of American film critics, Polish animation dir. Tomek Popakul titled ACID RAIN (produced by Animoon, 2019) has a chance to win an Oscar®. The Awards Circuit, which has been predicting Oscar awards for over 10 years, has placed Popakul as the most likely Oscar® winner in the Best Animated Short Film category. The animation would defeat the films of Nikki Schuster, David Nessl and Aggie Pak Yee Lee,”  reads the producer’s press release.

Tomek Popakul is a graduate of the Animation Department of the Film School in Łódź. He also studied screenwriting. So far, he has made several films, of which the graduation “Ziegenort” has been shown at many international festivals and has won numerous awards around the world.

The most frequently shown Polish short film in 2019

The producer of “Acid Rain” is the Polish studio Animoon, which specializes in the production of animated series as well as short and full-length films. The previous production carried out by the studio, ” Moomins and the Winter Wonderland”, was on the so-called  long Oscar list in 2018 in three categories – Best Animated Film, Best Music and Best Song. For the films produced, Animoon has already received over 50 prestigious awards and distinctions, and the studio’s films have been shown around the world in the programs of the largest and most prestigious festivals, such as Cannes, Sundance, Rotterdam IFF or especially the key for animation – the festival in Annecy.

The film “Acid Rain”, which is co-financed by the Polish Film Institute (the Institute also supports the Oscar campaign of the film) and co-produced by the National Film Archive – Audiovisual Institute (FINA), has already gained considerable recognition around the world. This is the most frequently shown and awarded Polish short animated film in 2019. So far it has been presented at about 60 festivals, including 6 major events in the USA and has won 17 awards. The film’s world premiere took place during the Rotterdam Film Festival, and the American premiere at the Sundance Festival, where it won the Vimeo Awards. Currently, the film can be watched in American, and soon also Canadian cinemas, as part of the Animation Next program.

Thanks to winning the Grand Prix at the AnimaFest Zagreb festival, the film can apply for qualification for the American Film Academy Awards and began the so-called Oscar path. Agnieszka Rostropowicz-Rutkowska is responsible for the promotional campaign from Poland. She cooperated at the promotional campaign of the short documentary “Joanna”, which in 2015 won an Oscar nomination and the full-length documentary “Communion” by Anna Zamecka, who in 2019 was on the short Oscar list and fought for the nomination. 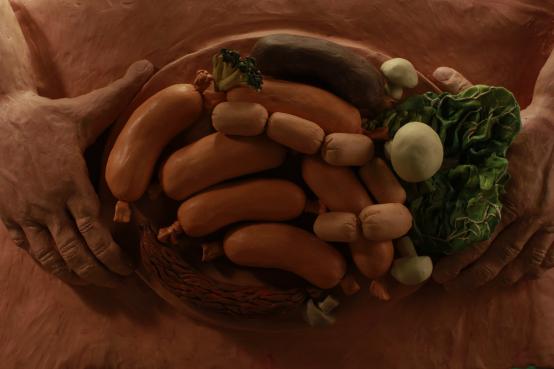 The second Polish animation that has a chance to be nominated for an Oscar® is “Portrait of Suzanne” by Izabela Plucińska. The film is a grotesque adaptation of a story by Roland Topor.

A small hotel in France with a man trying to prevent hunger for love by eating too much. Longing for my beloved Suzanne, however, will not be soothed by plates full of meats, vegetables and fruit. When the hero goes to the city in search of food, he accidentally injures his left foot, and this unexpectedly transforms into Suzanne. From now on they can be inseparable … However, this is just the beginning of a surreal story about loneliness, jealousy and love.

She was born in 1974 in Koszalin. She studied animation at the Film School of Television and Theater in Łódź as well as graphics and design at the Academy of Fine Arts in Łódź, and at the Film and Television Academy (HFF). Among the numerous plasticine animations, her most successful film was „Jam Session” (2005), which received numerous awards, including Silver Bear for short films at the Berlin festival. She currently lives in Berlin, where she runs her  own production company Claytraces.

The film was qualified for the American Film Academy Awards thanks to the award at this year’s Krakow Film Festival.

Another film that has a chance to be nominated is the Czech-Slovak-Polish co-production of “The Kite”. Polish animators Piotr Chmielewski, Łukasz Grynda and Stanisław Szostak worked on the film directed by Martin Smatana. The film’s co-producer is Wrocław’s CeTA. The image was presented at this year’s festival in Berlin in the Generation Kplus section.

“The Kite” is a children’s film that attempts to make small audiences aware that none of us will live forever. At the same time, it is meant to indicate that death does not have to mean the end of the journey of life. The project was carried out in Wrocław thanks to the main prize it won during the Animarkt pitching in 2017.

The list of films qualifying for the Oscar® nomination in the category of Best Animated Short Film 2020 has been published on Cartoonbrew.com.