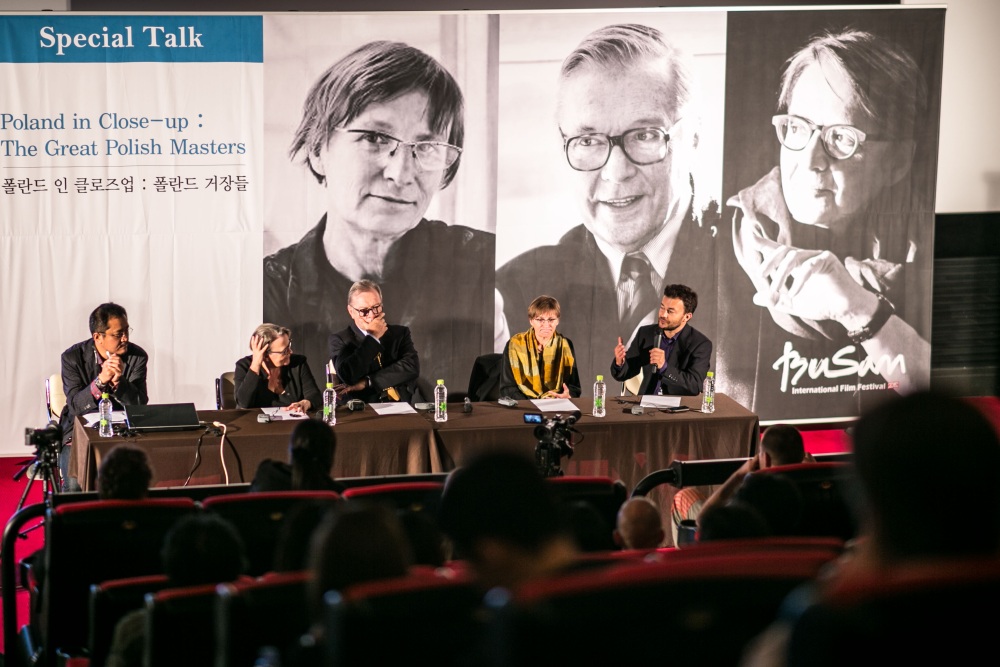 On 7 October 2012, at the 17th International Film Festival in Busan, the Polish Day was held, at which the Adam Mickiewicz Institute and the Polish Film Institute organised the conference “Poland in Close-Up: The Great Polish Masters” as part of the IAM project promoting Polish culture in Asia in 2012.

A discussion with Holland, Zanussi and Kędzierzawska

The conference was attended by three Polish directors: Agnieszka Holland, Krzysztof Zanussi and Dorota Kędzierzawska. The discussion was moderated by Michał Chaciński and Korean critic and documentary filmmaker Cho Jae Hong, specialising in Eastern European cinema history. The meeting with the Polish film-makers related to auteur cinema, the team system in filmmaking, and the importance of co-production in today’s film financing system.

The audience close to cinema

Agnieszka Holland recalled the history of the Polish Film School and its leading representatives. She pointed out the importance of the Second World War as a collective experience that shaped the post-war directors, as well as the impact of communist censorship, which, despite the restrictions imposed on artists, inspired them to communicate the content important to them in symbolic ways. The director also pointed out the idea of the ​​Polish film teams, where young film-makers were able to exchange experiences and views on the developed projects, and the involvement of the audience at that time – The audience was close to cinema, because it tackled important topics. They were very receptive – said Agnieszka Holland.

Krzysztof Zanussi compared the situation in post-war Polish cinema to the present situation in Iran. He agreed with Agnieszka Holland that censorship affected the creativity of young artists, and stressed the importance of high standards in the world of cinema of the 60s and 70s. – In times of communism, only selected films came to us from abroad. Polish films competed with the best. We had very high standards – said Krzysztof Zanussi.

Creativity in times of censorship

Kędzierzawska stressed the importance of creativity in times of censorship: – Incredibly important was that the cinema spoke between the lines. With considerable censorship, directors and writers expressed what they wanted to say in the form of their films. This had a huge influence on the quality of these films. The films spoke through undertones, which inspired inquiry and discussion about the film. The director also recalled the importance of auteur cinema and the importance of after-film cinema discussion, which she has recently been promoting with cinematographer Arthur Reinhardt within the project co-financed by the Polish Film Institute called “Photosensitive Poland.” She stressed that Polish audiences are coming back nowadays to cinemas for Polish films, even the more challenging ones, and there is a will in the audiences to discuss films and a desire to meet with the artists.

The gathered directors also pointed out that, after the transformation in Poland, film-makers were overwhelmed by freedom. Cinema became too literal in its message. The transformation was a hard time for Polish cinema, also because of the dramatic decline in expenditures on production, and therefore a decrease in the quality and hence the withdrawal of Polish audience from Polish cinema. At this time also, as Agnieszka Holland pointed out, the Polish film industry lost contact with the world’s industry, as the ties established at the time of communism became outdated, and the topics that Polish cinema tackled in the 90s were not attractive to Western European audiences. The exception was, of course, Krzysztof Kieslowski.

Film teams and the PFI

The discussion also touched upon the issue of film teams and how they affected the development of auteur cinema in Poland. Agnieszka Holland stressed the importance of exchanging experiences and discussing the projects; she compared the local system with the contemporary American industry, which is dominated by the producer’s system, imposing certain (and often set standard) solutions: – The film teams gave film-makers inner strength and freedom. They inspired creativity. There was no market. We all miss a little the earlier system, ruled by the quality of the film, rather than marketing. The director pointed out, however, the positive change in the system of financing of cinema in Poland since the establishment of the Polish Film Institute, and the fact that over the last years the level of films created in Poland has been growing, especially with regard to auteur cinema, which has been appreciated by the Polish audience coming back to cinemas.

Krzysztof Zanussi noted that Eastern European cinema over the past 20 years was virtually absent from the biggest festivals in the world until the establishment of the Romanian New Wave of cinema, presenting mainly the poverty of the Ceauşescu regime. The guests also talked about the role of co-productions in today’s system of financing films. – I make films primarily in the United States, France, but nonetheless it is still hard for me to pick up a co-producer. If this project (“In Darkness”) came from Poland, its financing would take not two years, but fifteen years – said Agnieszka Holland.

Meeting with the Korean audience

The Korean audience was interested, among other things, in the reasons that prompted the Polish artists to become film directors. The audience also asked whether it is possible to return to the idea of the C​inema of Moral Anxiety in times of advanced technologies. – The Cinema of Moral Anxiety was associated with specific times. Kieślowski once said that the decision the director takes about where to put the camera is a moral choice. Nowadays, people do not have the same context of reality, do not have one enemy and one objective (…) Now people are private in a divided world, they are members of the middle class. There is no experience connecting the generation. They do not want to talk about anything more than themselves. We’ll see, their films are interesting, sensitive, but we do not know how it will develop – said Agnieszka Holland.

At the end, the predominantly young audience asked the Polish guests for advice to young novices in the art of directing. Krzysztof Zanussi recommended that they develop an original language and not develop humility, keep being defiant – I give lectures in Moscow at the VGiK, I tell my students – you must be special at something (…) When I lectured in Copenhagen a certain Lars von Trier attended some of my classes. Later he wrote in his memoirs that I was a terrible professor. He was a terrible student, but he is a great director – said the director.

As part of the special section, “Poland in Close-Up: The Great Polish Masters” on the achievements of Polish cinema, there were shown the following films: “Pociąg [Train]” by Jerzy Kawalerowicz, “[Zezowate Szczęście [Bad Luck]” by Andrzej Munk, “Rękopis znaleziony w Saragossie [The Saragossa Manuscript]” by Wojciech Jerzy Has, “Rysopis [Identification Marks: None]” by Jerzy Skolimowski, “Cul-de-sac” by Roman Polanski, “Ziemia obiecana [The Promised Land]” by Andrzej Wajda, “Przypadek [Blind Chance]” by Krzysztof Kieślowski, “Rok spokojnego słońca [A Year of the Quiet Sun]” by Krzysztof Zanussi, “Wrony [Crows]” by Dorota Kędzierzawska and “W ciemności [In Darkness]” by Agnieszka Holland. After the screenings of films by Agnieszka Holland, Krzysztof Zanussi and Dorota Kędzierzawska there were meetings with the directors.

The 17th edition of the International Film Festival in Busan will last until 13 October.