Polish Presence at the 69th Berlinale


On February 7, the 69th International Film Festival in Berlin begun. The program includes films co-financed by the Polish Film Institute and events related to the Polish cinema.

“Mr Jones” in the Main Competition 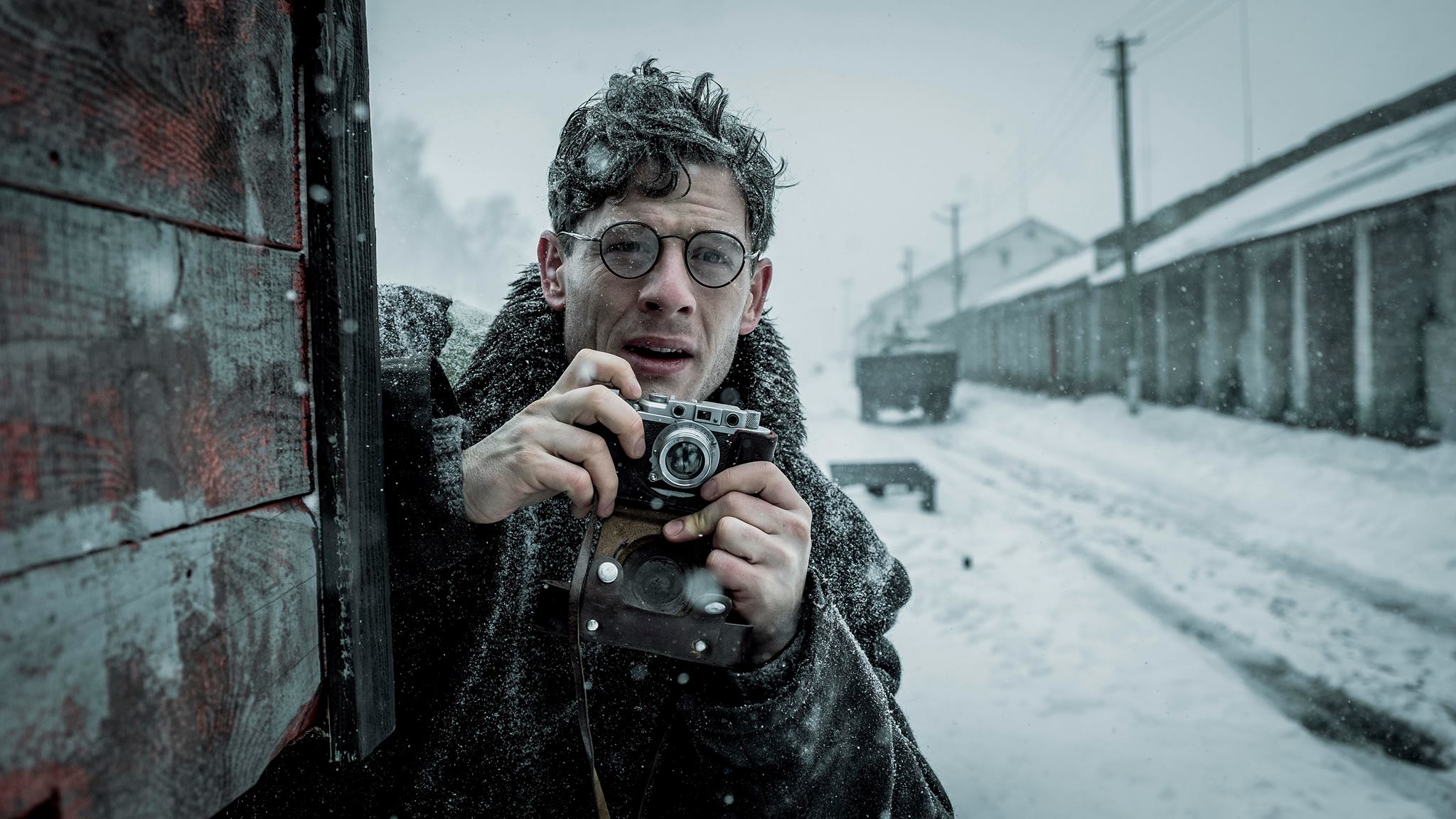 The world premiere of Agnieszka Holland’s new movie “Mr Jones” (produced by Film Produkcja) took place in the Main Competition of the 69th International Film Festival in Berlin. The film is co-financed by the Polish Film Institute.

In the Main Competition of 69. Berlinale, 16 out of 23 titles presented in this section compete for the Golden Bear. The films in this year’s Main Competition are judged by the jury composed of: actress Juliette Binoche (chairman), film critic Justin Chang, actress Sandra Hüller, director Sebastián Lelio, curator and author Rajendra Roy and actress and producer Trudie Styler.

“Mr Jones” will fight for the following prizes: the Golden Bear for the best film; the Silver Bear – Jury Award; Silver Bear for the best director, for the best actor or actress, for the best script; the Alfred Bauer prize for setting new perspectives in film art and rewards for the best photos, music, editing or costumes. Agnieszka Holland’s film is also evaluated by independent bodies, including the FIPRESCI jury or the ecumenical jury. The Polish title is presented in the Main Competition together with new productions of such directors as Isabel Coixet, Fatih Akin or François Ozon. West End Studio is responsible for the international sale.

Dates of the screening of the movie “Mr Jones” 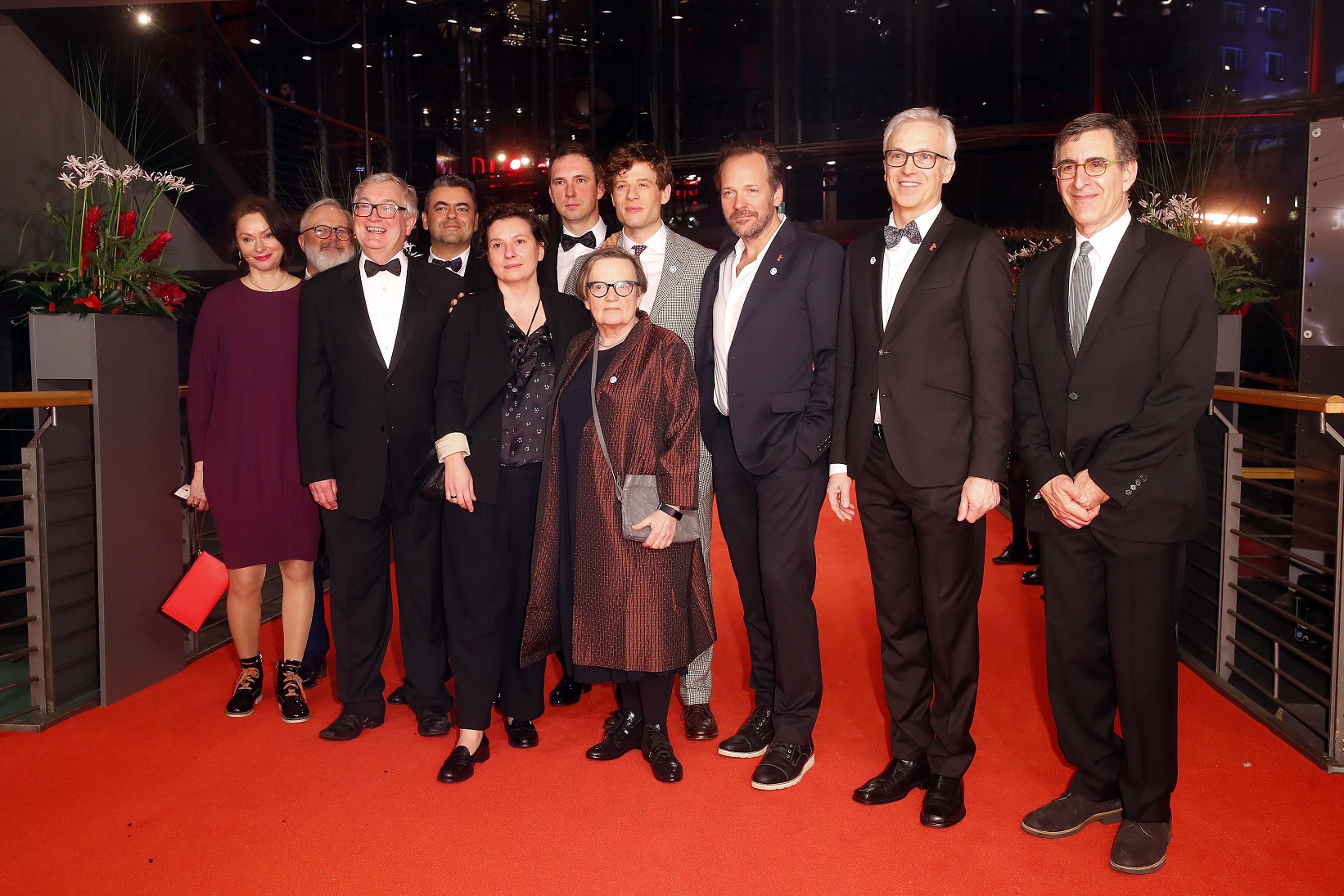 “The approach to the topic, as well as the narrative, extremely simple but unconventional, convinced me that this is a story that I want to tell. The Great Famine in Ukraine is one of the worst crimes in the history of mankind caused by man, by the regime, and so little researched and publicized. Victims of this crime demand justice, shedding light on these events, so I considered it a moral obligation,” said Agnieszka Holland during a press conference.

“Story” in the Generation 14plus competition 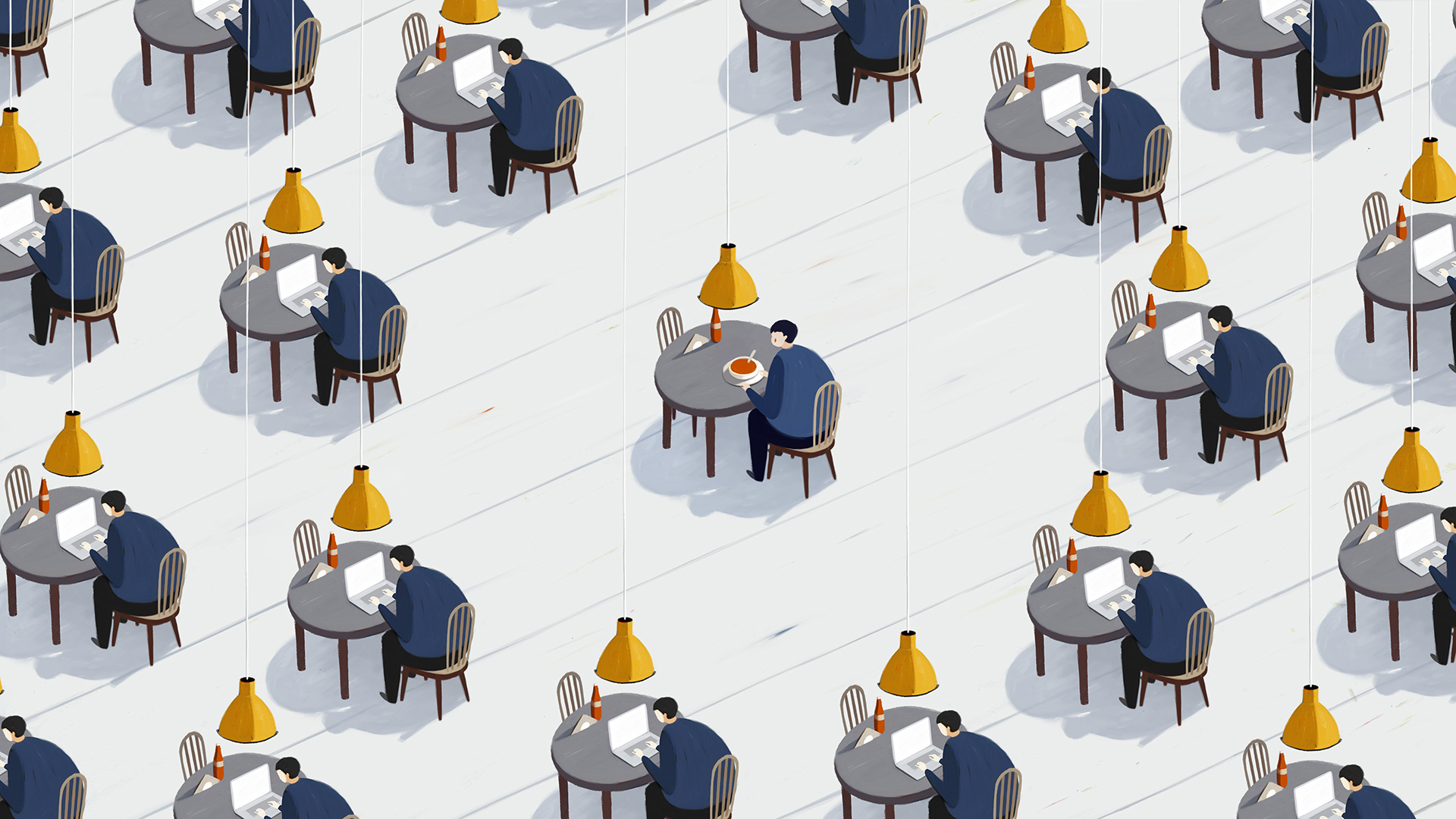 Co-financed by the Polish Film Institute, “Story” by Jola Bańkowska (produced by Studio Munk, Letko) was among the 16 short competition titles of the Generation 14plus section, where it fights for the Crystal Bear statuette. Films in this section evaluate two juror groups: a youth jury (7 people aged 14-18) and a jury made up of professionals from the film industry (3 people).

New Europe Film Sales is responsible for international sales of the film.

Dates of the screening of the film “Story”

“Who will write our history” as part of a special screening

As part of special screenings, festival participants watched the co-financed by the Polish Film Institute American-Polish co-production “Who will write our history”. During a press conference, Berlinale director Dieter Kosslick said: “Everyone who hasn’t seen this film should go.”

The Polish Film Institute supports the film “Who will write our history” directed by Roberta Grossman. “Thanks to the historical figures reminded in the film – Emmanuel Ringelblum and members of the Oneg Shabbat group – the world has a unique archive, which to this day is an example of how to fight for the truth against totalitarian propaganda. The special screening of this film will be an opportunity for the audience of the International Film Festival in Berlin to get to know this part of our history. I would like to congratulate the creators, especially Polish actors who participated in this extraordinary film,” says director of the Polish Film Institute Radosław Śmigulski.

Cinephil is responsible for the international film sales.

The special screening of the film “Who will write our history” took place on February 10.

“The Kite” carried out in CeTA in the Generation Kplus competition 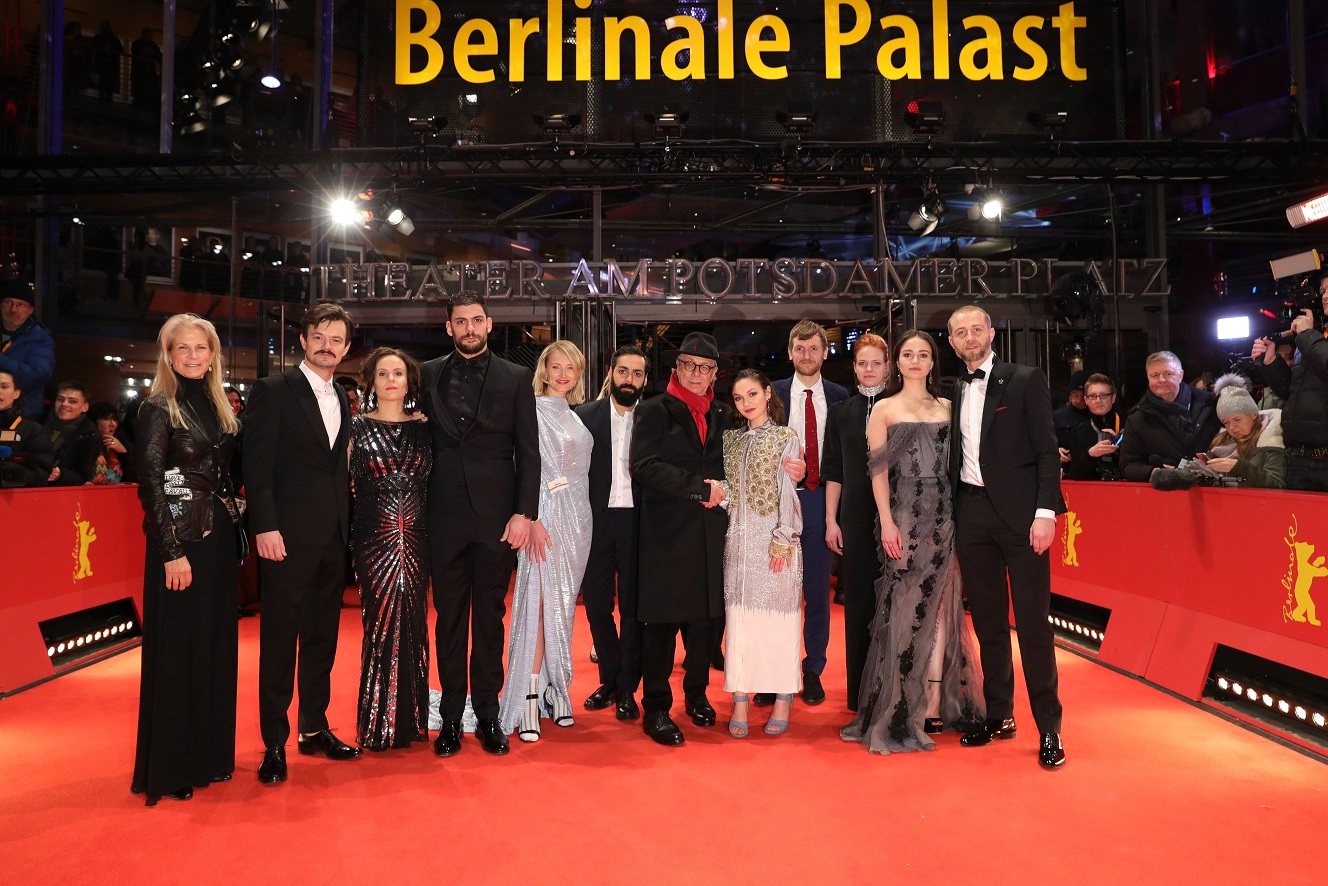 Dawid Ogrodnik received this year’s European Shooting Star title among nine other young European actors. Shooting Stars is a special program created by European Film Promotion (EPF), which aim is to promote young and talented European actors. The Shooting Stars official presentation will take place from February 8-11, 2019, during the 69th Berlin International Film Festival. It will be the 22nd edition of this event. More about this year’s participants of the program: http://en.pisf.pl/news/dawid-ogrodnik-selected-as-2019-european-shooting-star.

The hosts of the Emerging Producers program organize the meetings with producers participating in Berlinale. In this year’s edition, Poland is represented by Stanisław Zaborowski, producer and co-owner of the Silver Frame production house. Emerging Producers is a promotion and education program. Every year, the organizers choose 18 talented producers (17 from Europe and 1 representing the host country of the festival – this year Morocco), for whom they provide educational support, contacts and promotion. The main purpose of the program is to help participants in establishing contacts with producers from other countries, and thus increasing the potential of future European co-productions. The main part of the project takes place in Jihlava during the International Documentary Film Festival at the end of October. Berlinale

During Berlin Co-Production Market two projects is presented: “Stillborn”  by Olga Chajdas, produced by Apple Film (as part of the Rotterdam-Berlinale Express) – the film was recently awarded during the Rotterdam festival, and  the Israeli-Polish project “The Property” by Dana Modan, co-produced by Extreme Emotions from Poland.

The Polish Film Institute is a partner of Berlinale Co-Production Market. 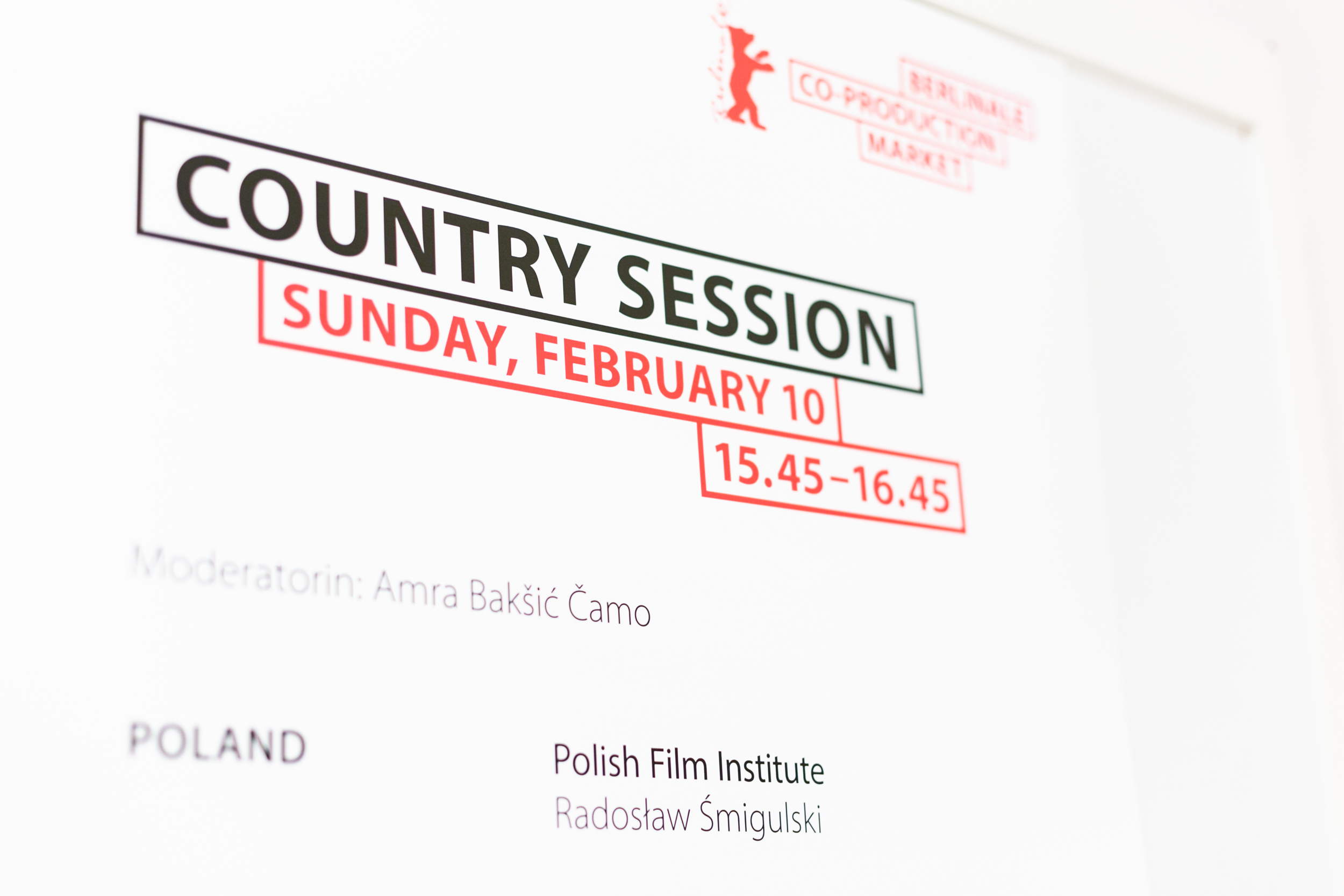 As part of the partnership, PISF took part in the Country Session – presentation of film funds (10 February, 15.45-16.45, Casino, House of Representatives).

On the other hand, five producers who start working on the international arena (Anna Wereda, Jan Pawlicki, Marta Gmosińska, Kamil Skałkowski and Dagmara Piasecka) are taking part in the Visitors Program of the Berlinale Co-production Market.

During European Film Market, next to the titles present in the program of this year’s festival, the following Polish films and co-productions were screened: “Squadron 303” by Denis Delić, “The Butler” by Filip Bajon, “Dolce Fine Giornata” by Jacek Borcuch, “Jacob, Mimmi and the Talking Dogs” by Edmunds Jansons, “The Mute” by Bartek Konopka, “Werewolf” by Adrian Panka and “Forever a Pilot of the Spitfire & 303 Squadron” by Sławomir Ciok. The Warsaw Film School has planned the screenings of its latest productions, which will take place under the name “Good Shorts Are Here”. 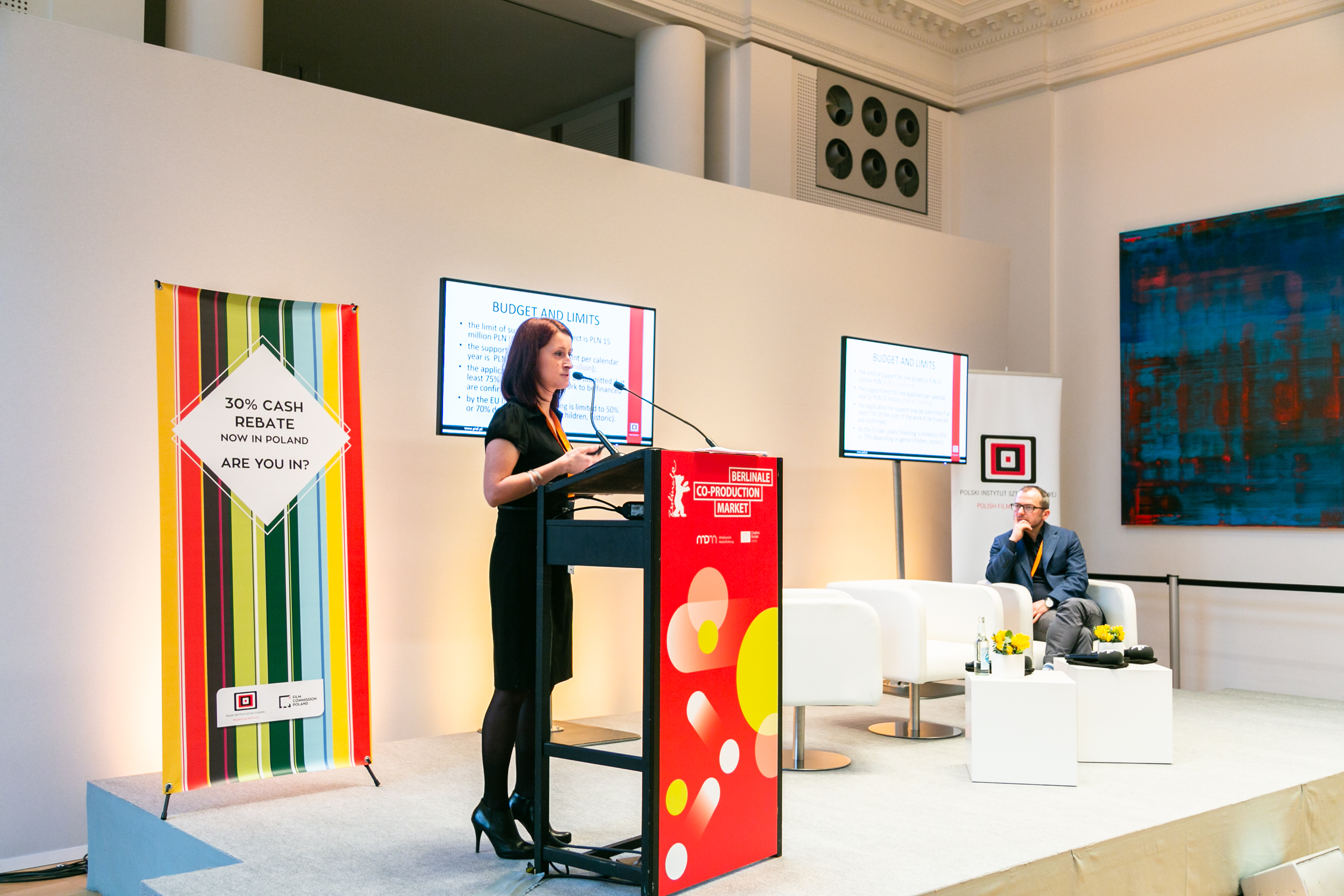 The Act on financial support for audiovisual production comes into force in Poland this year.

In order to introduce the principles of the new mechanism to foreign film industry representatives PISF was host a presentation devoted to incentives, which was held on 10 February at 10.30 am, at the House of Representatives, Niederkirchnerstraße 5,Berlin. 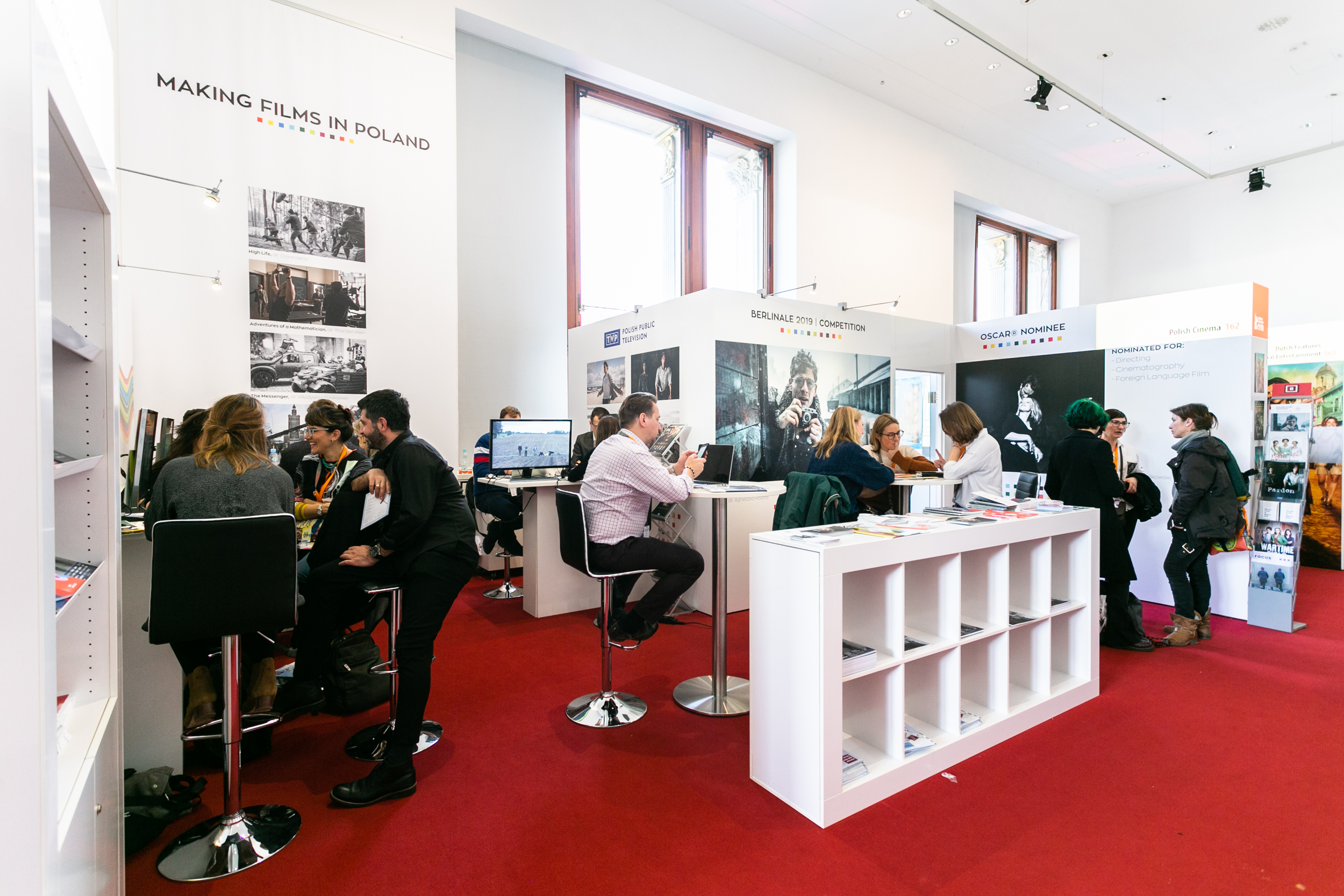 The organizers of the stand are: Polish Film Institute, Film Commission Poland and Polish Television S.A. The project is being carried out for the fourteenth time. It exisits independently as a Polish stand for the ninth time.

Film Commission Poland has prepared an electronic publication to facilitate foreign partners in establishing contacts with the Polish film industry. The English-language publication Poles in Berlin 2019 provides information about participants, their projects, sought-after films and partners. The publication is available online at: www.filmcommissionpoland.pl/about-fcp/poles-in-berlin-2019.

At the Berlin festival, a new issue of Polish Film Industry is presented, which is also available online.

Another Polish accents at the festival

In this year’s jury of the Generation Kplus competition will sit Jerzy Moszkowicz, director of the International Young Audience Film Festival Ale kino!. Marlena Gabryszewska, who leads the Elektronik cinema at the Warsaw Film School, will be a member of the Europa Cinemas jury, which evaluates films from the Panorama section. This is another Polish representative, in previous years Gosia Kuzdra from the Muza Cinema in Poznan assesed the films in the same section.