Protector Wins Off Plus Camera 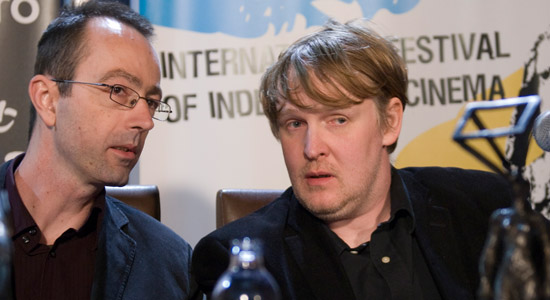 Protektor (Protector) by Marek Najbrt, the story of a difficult love in wartime occupied Czechoslovakia, was yesterday announced the winner of the Off Plus Camera film festival in Krakow. The award was presented to the Czech filmmaker by Jacek Majchrowski, mayor of Krakow, and Agnieszka Odorowicz, general director of the Polish Film Institute. For “setting the path” (the theme of the Main Competition), Najbrt received a cash prize of 100,000 dollars, along with two grants: one million PLN from the Polish Film Institute for producing his next project in Poland, and another million PLN based on a similar principle from Leszek Czarnecki, owner of festival sponsor Noble Bank.

“Our eight-member crew is having a wonderful time here, these are the most precious moments”, said Najbrt. “I have never received such a huge award before. I will share it with the people who made this film with me. Two million PLN is a pretty good basis for a film budget. It’s enough to start getting the project ready”, he added later at a press conference. “I would like my next film to be about friendship and love, something between documentary and feature. I know for certain that the film will be set in contemporary times.”

“The jury vote was unanimous”, said Zbigniew Preisner, president of the jury. “The jury had to be slightly altered, as some of its members were unable to fly to Krakow; our last-minute additions to the group were director Petr Zelenka and film critic Brandon Harris. I would like to thank them both.”

The audience award went to the multinational co-production The Good Heart by Dagur Kári. The award was accepted by the film’s Polish distributor, Roman Gutek.

“I did not expect to appear on stage at this particular festival”, joked Gutek, known as the man behind the Era New Horizons film festival. “It’s a shame that there continues to be a discrepancy between the opinion of the critics and the audience; it is the audience’s views that I see as most important. One of my dreams is a joint Polish award of Krakow-Wroclaw-Warsaw,” he added, referring to the venues of Poland’s key international film events.

The critics’ award for the American production Easier With Practice by Kyle Patrick Alvarez was presented by Przekrój magazine’s editor-in-chief, Katarzyna Janowska.

“However one might treat film reviews, they always create room for new associations”, said Janowska. The director, unable to be in Krakow, connected to the Kijów cinema screening room via the Internet. The audience was able to see his surprise on the big screen.

“It is a great and completely unexpected honour. I am very sorry that I cannot be with you tonight”, said Alvarez. The award will be passed to him by jury member Brandon Harris.

Off Plus Camera, a film festival focused primarily on young and independent cinema, also had three extra awards to honour very young and amateur filmmakers.

In the “Current events” category (filmed using mobile phone cameras), online voters and the TVN24 television station awarded the main prize to Bartłomiej Słubicki for his film Wędkarz na krze. The Allegro competition for best student film of 10 minutes or less was won by Julia Sokolnicka and her film Z głowy. The winner in the third category, “L’OFF Story” sponsored by Plus, was Bartek Tryzna and his short film Mateusz i Marta.

“I am very glad that in spite of all the difficulties thrown at us by nature [the volcano incident], the festival was a success. This third edition was by far an event of supreme quality. I believe that Off Plus Camera is on its way to becoming an important event in world cinema”, said Zbigniew Preisner at the press conference after the awards ceremony.

The awards gala in Krakow’s Kijów cinema was accompanied by two concerts. The first was an excellent performance by Gaba Kulka. The second was a surprise: one of the jury members, a renowned film director, screenwriter, and composer, performed on-stage with his life partner, the professional musician Rosie Chan.