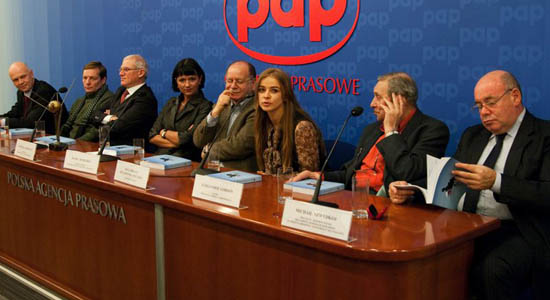 “We have lowered the footbridge for politicians to walk upon. Culture unites and facilitates cooperation. That is our main goal”, said Piotr Skulski, the festival’s coordinator of Polish- Russian cooperation, at Thursday’s press conference of festival reps and guests.

“It’s good that film festivals and culture are above politics, regardless of the current state of official relations between our two countries”, added Mikhail Shvydkoy, special representative of the Russian President for international cultural cooperation.

The festival’s director Małgorzata Szlagowska-Skulska thanked the Director of the Polish Film Institute Agnieszka Odorowicz for supporting the idea behind the festival. “This is one of the key goals of the Polish Film Institute”, said Odorowicz. “Relations between Poland and Russia were once very close, the younger generations no longer feel these ties. It brings me joy to see that Russians enjoy Polish film, and young Poles queue to see old and new Russian films at this particular festival”.

Over 150 films will be screened during Sputnik. The festival will start on November 6 and end on November 15. Screenings will take place at Warsaw’s Kinoteka and Kultura cinemas.

This year will bring the first edition of the New Russian Cinema Competition, for the festival Grand Prix. 14 selected films from the years 2008-2009 will take part in the competition:

The competition films will be judged by a jury. Its members include Jacek Hugo-Bader (reporter from Gazeta Wyborcza), Małgorzata Sadowska (journalist from Przekrój) and Janusz Wróblewski (journalist from Polityka).

Fans of Andrei Tarkovsky are in for a treat. A retrospective of his films will be screened, including his student film The Killers (Ubiytsy), which he made together with Aleksandr Gordon and Marika Beiku, based on a short story by Ernest Hemingway. Other Tarkovsky films will include Andrei Rublev, Solaris, The Mirror (Zerkalo) and The Sacrifice (Offret).

Another festival section will screen documentaries, never before seen in Poland. These include Shchipok – a film about the Tarkovsky house in the village of Shchipok; Memory (Pamiat) – a Tarkovsky-style film about the house where he was born and raised; and Student Andrei Tarkovsky – based on the memoirs of Aleksandr Gordon, a friend of Tarkovsky and life partner of his sister Marina Tarkovskaya. Both will be guests at the festival, will take part in a Q&A with the festival audience and a panel debate on the art of Tarkovsky. Other panel members will include the film critic Tadeusz Sobolewski and Viktor Matizen, President of the Film Critics Guild of the Russian Union of Cinematographers.

Festival audiences will also have the chance to see the works of another prominent Russian director, actor and writer – Vasili Shukshin. October 2 this year was the 35th anniversary of his death. He directed five films and played in over 20, including some of his own.

Guests of the festival will include the director’s wife, the prominent actress Lidiya Fedoseyeva-Shukshina, and his daughter, actress Maria Shukshina. A panel discussion on the works of Shukshin will be moderated by Grzegorz Szymczak, a Ph.D. at the Russian Language Institute at the University of Warsaw.

Another VIP guest of the festival will be the director Karen Shakhnazarov, author of 13 films and laureate of numerous awards at international festivals. His latest feature Ward No. 6 (Palata N°6), based on a short story by Anton Chekhov, will be screened at the festival’s closing ceremony.

Sports enthusiasts also have something to look forward to. One of the festival’s guests will be the famous boxer Nikolai Valuev, who starred in the film Kamennaya bashka (also screened at the festival).

Another festival section is dedicated to the 20 years of the Kinotavr Open Russian Film Festival, Russia’s largest national film event. Sputnik will screen films that have gained the greatest acclaim of Kinotavr juries over the years. These films include The Red Flute (Mest) by Yermek Shinarbayev, Ulybka by Sergei Popov, Osobennosti natsionalnoy okhoty v zimniy period and Checkpoint (Blokpost) by Aleksandr Rogozhkin, Prisoner of the Mountains (Kavkazskiy plennik) by Sergei Bodrov, and Time of the Dancer (Vremya tantsora) by Vadim Abdrashitov.

The Come and See (Idź i Patrz) section will present the masterpieces of Soviet war cinema, including The Cranes Are Flying (Letyat zhuravli) by Mikhail Kalatozov, Fate of a Man (Sudba cheloveka) by Sergei Bondarchuk, and Ballad of a Soldier (Ballada o soldate) by Grigori Chukhrai. The festival section’s title honours the title of Elem Klimov’s feature, considered to be one of the most prominent war films in the history of cinema.

The Sputnik over Poland festival in co-financed by the Polish Film Institute.

Further details about the festival and a detailed schedule are available at www.sputnikfestiwal.pl (Polish and Russian only).