Szumowska's "In the Name Of..." Premieres at 63rd Berlinale 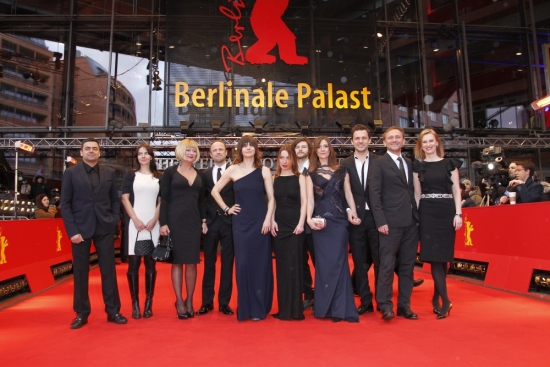 The creators of W imię… (In the Name Of…). Photo courtesy of AKPA

February 8 brought the world premiere of W imię… (In the Name Of…), the latest film from director Małgorzata Szumowska, at the 63rd Berlin International Film Festival. This film, co-financed by the Polish Film Institute, screens in Berlinale’s Main Competition.

At the morning press screening, the film was warmly received by members of the international press. The official gala screening took place later that day, where the creators were welcomed on Bęrlinale’s red carpet by festival director Dieter Kosslick.

“I didn’t want to make a film that would simply be controversial, be ‘against’ something or ‘for’ something. This film was not intended as an attack on the Church or on religion,” said Małgorzata Szumowska at the press conference. “During the making of our film, somehow the topic became very hot […]. But for me, it all began with a small newspaper article about a young boy who killed a priest. There was something mysterious about this article, something that fascinated me.”

A Subtle Approach to Filmmaking

“Mateusz and I have known each other for a long time; I played his father in another film (Wszystko, co kocham / All That I Love by Jacek Borcuch). When we were shooting this film two years ago, we didn’t shoot two [very important] scenes that are in the film. It took us a year to mature enough to film them. Working with Małgośka, whom I have known for a very long time, is more about trust: we are friends, so we didn’t especially need to prepare to work together. This was a sort of experiment, there was a lot of improvisation during shooting. But of course we had the script,” said lead actor Andrzej Chyra at the press conference.

“I saw writing the script together with Małgośka as an advantage. Everything came very naturally, such as finding locations. We focused on the cinematic side of the film. It may seem scandalous that we tried to film such a topic in a subtle way, without excess dialogues. That was the way we created the visual language of this film – by making a film that was simple and sensual,” said co-writer and cinematographer Michał Englert at the press conference.

Support from the Polish Film Institute

During the press conference, Canadian journalist Anne-Christine Loranger praised the film’s editing. “You have made a strong film, there’s no doubt about that. Probably stronger because it is very delicate,” she said.

“[Many] journalists have asked me if it was hard to get funding for a film on this topic in Poland. No, it was not hard, because we have the Polish Film Institute and Agnieszka Odorowicz, the head of the Polish Film Institute, is not afraid of controversial issues and controversial aims in films. Poland is a democratic country, where you can say whatever you want and you can make the film that you really want. Of course, if it was about private funding, it might be more difficult. But Agnieszka Odorowicz was very helpful regarding this film. From the beginning, she was very open and very curious about the subject,” emphasized Małgorzata Szumowska at the Berlinale press conference.

“I am happy that I am from Poland. It gives me the strength to make another film. There is always something going on; everything is always kind of fresh. If there is a discussion, it is always a strong discussion, sometimes even aggressive. We are always talking about our history, about who we are and where we are from. This is very creative on one hand, but on the other hand it is not very comfortable for living.  That’s probably why Eastern European films might have a different value, different strength than films from other parts of Europe. I would say it is mostly about history and mentality,” said Szumowska at the press conference.

Małgorzata Szumowska’s latest feature is her third full-length feature film to screen at Berlinale. In the Name Of… is a contemporary story about a priest who launches a help centre for troubled youths in a small parish. The good priest is well-liked by his congregation, yet he keeps the details of his complicated past a secret.

The screenplay was co-written by Małgorzata Szumowska and Michał Englert, who also lensed the film. In addition to lead performances by Andrzej Chyra and Mateusz Kościukiewicz, In the Name Of… features performances by Maja Ostaszewska, Łukasz Simlat, Tomasz Schuchardt, Maria Maj, Olgierd Łukaszewicz, as well as non-professional actors. The film was produced by Mental Disorder 4 (MD4), co-produced by Canal+, and co-financed by the Polish Film Institute. World sales are handled by Memento Films International. The film’s Polish distributor is Kino Świat.

Winners of the Berlinale Main Competition and other festival sections will be announced on February 16.

The video stream of the In the Name Of… Berlin press conference is available on the Berlinale website.