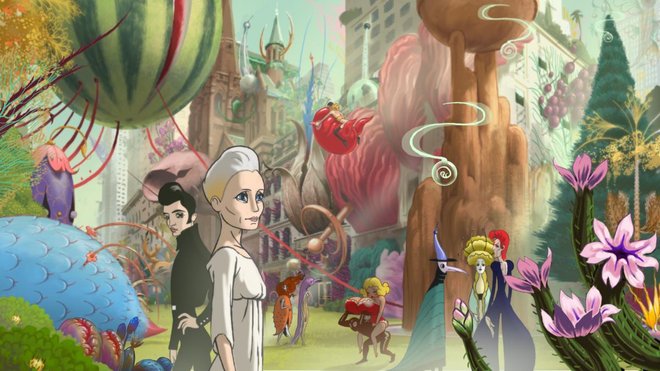 After The Congress, directed by Ari Folman and co-financed by the Polish Film Institute, had its world premiere at the 66 th Cannes International Film Festival, reviews of the film were published in both Polish and international press.

An Analysis of Reality

Stopklatka.pl published a review written by Karolina Pasternak, in which she states: “This is a simple and accurate ascertainment of our times, where everyone tries to construct their own sense of self, they brand themselves, wanting to create a public sphere of their own lives (on Facebook, for instance).”

A Film Inspired by the Works of Stanisław Lem

“Many directors know that tackling the works of Stanisław Lem is not an easy job; the writer himself was critical of most adaptations of his work. How did the director of Waltz with Bashir handle this mission? It appears he chose the best of possible paths. He took a few key motifs from a short story by Poland’s most-often translated author and constructed his own film fantasy around it, far detached from the original,” writes Magdalena Bartczak for Portalfilmowy.pl.

Polish and international journalists alike praise the performance of Robin Wright, who played the lead role in The Congress. “Robin Wright gave a stellar performance. In the film’s opening scene, the camera is still, focused on her face; the sad eyes of the crying woman almost reveal the life that had slipped through her fingers,” writes Karolina Pasternak. According to Dan Fainaru of Screen Daily, “Wright, in a role […] similar to her own life, comes through with flying colours, confidently carrying all the live action sequences on her shoulders.”

According to Magdalena Bartczak of Portalfilmowy.pl, Ari Folman’s The Congress is a film, in which “as a sort of paradox, its greatest strengths lie in the images, skillfully elaborate both in the live action sequences (hats off to Michał Englert!), and in the animation.” According to Karolina Pasternak, “Ari Folman, accompanied by Polish cinematographer Michał Englert behind the camera, did an exceptional job on the live action sequences. The screenplay sizzles with sarcastic commentary, the cinematography makes us feel like we’re here and now while also being in some surreal space, dissimilar from any scenery found in real life.”

A Visionary, Bold and Touching Film

In his review on the Krytyka Polityczna website, Jan Topolski writes: “In Poland, this is without a doubt one of the most awaited films of the year […]. This is a deep and visionary film, often rather loose with the original, but making up for it with a multitude of other contexts. […] The series of the protagonist’s never-ending hallucinations is a blaze of stunning images, laced with a very Lem-esque anxiety about the limits of our cognition, the definition of happiness and freedom, and visions of the future. […] Folman carries the narrative with confidence, easing the transition from live action to animation by modeling the latter to exactly reflect the live action footage. […] A truly spectacular performance with a critical edge.”

“This is a venturesome and provocative piece with a great deal on its mind. […] Folman’s live-action direction is confident and attractive,” writes Todd McCarthy for The Hollywood Reporter. In the words of Guy Lodge of Hit Fix, The Congress is a “bold, brave and distinctly weird new film.”

According to Damon Wise of Empire Online, Ari Folman’s latest work is extraordinary and touching.

The Guardian‘s Xan Brooks states that: “Folman’s film is a queer fish […]. At times the metaphysical musings lead it wildly off track and deep into the rough, though there is always enough ambition and eccentricity to keep the journey interesting.” According to Damon Wise, The Congress is “an extraordinary and very touching film that exists somewhere in the twilight zone between the existential brainteasers of Charlie Kaufman and the psychedelic wonders of Hayao Miyazaki.”

“The films turns out to be [a] kind of visionary work […]. At its best, it’s lyrical and mysterious, contemplating age-old sci-fi questions (of artificial intelligence, of perception versus reality) while grafting them onto a commentary about the changing nature of movies,” writes Ben Kenigsberg for www.rogerebert.com.

“The live-action part […] is certainly the most coherent and as a result perhaps the most enjoyable. In Danny Huston’s studio mogul and Harvey Keitel’s scrappy agent, the film finds mouthpieces for what is essentially straight-up Hollywood satire, reminiscent of the disastrous SimOne, but much better and a good deal wittier,” writes Jessica Kiang in her review of The Congress for Indiwire.

“I also like the fact that there is actually something comforting about The Congress. Folman shows this in the sequence where Wright is being scanned, while her agent tells her how he made it into show business and how he preyed on the weakness of his star for years. So Wright wasn’t playing emotions during the scan; they were authentic. Evoked in the simplest way possible: through storytelling. No fireworks, no special effects. What was later added to her expression using computer imaging -that is less important. At least that’s what I want to believe. And I think Folman believes that, too,” states Karolina Pasternak in her review.

Paweł T. Felis’ interview with Ari Folman is available at Gazeta.pl (Polish only).