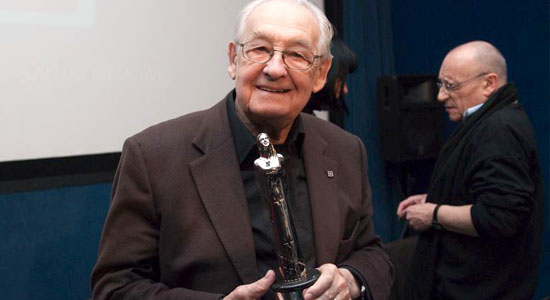 “I have the impression that my film will be much better received abroad. I think our audiences don’t really like sad, melancholy films”, said Andrzej Wajda, who received the European Film Academy Critics Award – Prix FIPRESCI for his film Sweet Rush last Saturday. On Monday he proudly presented his award to journalists at a press conference.

The second of Polish winners, Marcel Łoziński (whose Poste Restante received the award for Best Short Film), emphasized the rebirth of the short documentary form. “A lot can be told in 15 minutes; the documentary form is incredibly powerful”, he said.

He thanked Agora, the company that sponsored most of the film. “I hope for many such sponsors of cinema”.

Andrzej Wajda admitted that at first he was sceptical about the idea of the European Film Awards, but today he believes it is a good project. He praised Michael Haneke’s The White Ribbon, winner of the Best European Film award last Saturday. “It touched my heart; this was a film that could only be made in Europe”.

“It makes me very happy that the films of our cinema masters are appreciated internationally, even though we are a minority in the European Film Academy”, said Michał Kwieciński, producer of Sweet Rush. The Academy has over 2,000 members, 77 of which are Polish.

Agnieszka Odorowicz, the General Director of the Polish Film Institute, thanked the two filmmakers for ‘making us proud’. “We should no longer feel inferior in terms of international awards. Our films are being shown and noticed worldwide”, she added.

Michał Kwieciński announced that Sweet Rush will be released in cinemas in at least 25 countries. He stressed that the film has been very well received abroad. He talked about screenings of Sweet Rush in Calcutta: “5,000 people watched the film; they were deeply moved, and the Q&A session after the screening lasted three hours”.

When asked about the reason for the latest successes of Polish films and how it’s possible that so many good pictures are being made in Poland, Wajda replied: “The success of our cinema is the success of the Polish Film Institute and the new film law”.

“We are dealing with an explosion of talents in our cinema”, said Odorowicz. “The effects of the new film financing system are already visible, but all we do is create opportunities. The rest is up to the filmmakers”.

Odorowicz emphasized the real success of Polish cinema: “Polish films attract a wide audience. There is an increasing number of successful debuts; important films are being made. And our films are winning many international awards; they are recognized around the world”.

“We are now exporting our cinema financing model”, said Maciej Karpiński, representative of the General Director of the Polish Film Institute for International Issues. “Slovakia and Bulgaria have now adapted a similar system. Sweden also wants to make use of our experience”.