Winners of the 50th Krakow FF 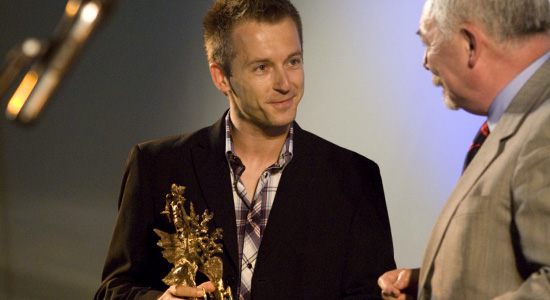 Tonight marked the closing of the 50th edition of the Krakow Film Festival. Over 30 awards were presented at the closing gala, held at Krakow’s Kijów cinema. The event was opened by a Tomasz Stańko recital. The guests of the ceremony and gala host Wojciech Mann were then invited on stage.

“I see a lot of young people receiving awards at this festival. Their films are proof of incredible professionalism and sensitivity, so eagerly awaited by audiences,” said Bogdan Zdrojewski, Minister of Culture and National Heritage, in his speech.

“The first of the jurors was the festival’s programming director Krzysztof Gierat, who selected the competition films among over 200 submitted projects,” said Marian Marzyński, president of the Documentary Film Competition Jury.

Awards in the Documentary Film Competition were handed out in two categories: for films under and over 60 minutes in length.

The Golden Horn Award for Best Documentary Film in the Over 60 Minutes Category went to Kaleo La Belle from Switzerland for Beyond This Place. The Silver Horn in this category was awarded to Rob Lemkin and Thet Sambath for of Enemies of the People, a co-production between the UK and Cambodia.

The Golden Horn for Best Documentary Film in the 30-60 Minutes Category went to Andrey Gryazev, director of Sanya and Sparrow, while the Silver Horn Award went to Marc Isaacs for the UK documentary Men of the City.

Honourable mention in the Documentary Film Competition went to Marysina Polana (The Dog Hill) by Grzegorz Zariczny, Who Looks After by Muriel Rebora, 108 by Renate Costa, Osadne by Marko Skopa, and As Lilith by Eytan Harris.

The Golden Dragon Award in the International Short Film Competition was presented by Jacek Majchrowski, mayor of Krakow. The award went to Jakub Stożek, director of Poza zasięgiem (Out of Reach).

“It is particularly nice for me to be receiving this award in my home town,” said Stożek. “I would like to thank Natalia and Marcin Koszałka. I could always count on them while working on my film. I would also like to thank my protagonists; teenage girls who proved to be more mature than adults,” he added.

“It was an excellent competition, and a great adventure for us,” said Krzysztof Zanussi, president of the International Competition Jury.

Winners of the Polish Competition and the Golden Hobby-Horse Award were Julia Ruszkiewicz and Karolina Bielawska, directors of Warszawa do wzięcia (Warsaw Available).

“Congratulations. Being selected by such an acclaimed jury is truly a great accomplishment,” said Agnieszka Odorowicz, director of the Polish Film Institute, as she presented the award.

“It was initially supposed to be a different film, but the reality took us by surprise,” said Karolina Bielawska.
“That’s why we feel that this award also celebrates our protagonists,” added Julia Ruszkiewicz.

“Please give our best to your protagonist,” joked Krystian Lupa, representative of the Jury, to Igor Chojna while presenting him with the award.

Honourable mention in the National Competition went to Esterhazy by Izabella Plucińska and Poza zasięgiem (Out of Reach) by Jakub Stożek.

“This is one of the very few awards for editing in Poland, which is what makes it so special,” said Jagiełło in his acceptance speech.

The Bronisław Chromy Sculpture for the Best Producer of Polish Short and Documentary Films went to the Andrzej Wajda Master School of Film Directing. It was presented by Bronisław Chromy and last year’s winner Anna Wydra.

“This is a collective award,” said Adam Ślesicki of the Wajda Film School as he accepted the sculpture. “Success has many fathers. In this case, it also has many mothers,” he added.

The Student Jury also presented its awards. In the Short Film Competition, the student jury awarded Incident by a Bank by Ruben Östlund for “the Swedish definition of an action movie”. In the National Competition the student jury award went to Marcin Koszałka, director of Deklaracja nieśmiertelności (The Declaration of Immortality) for the fact that “thanks to this documentary, he is no longer running; instead, he is climbing to the top”. The Krakow Student Jury Award went to Koszałka for Ucieknijmy od niej (Let’s Run Away from Her).

The audience award also went to Marcin Koszałka for Deklaracja nieśmiertelności. “I would like to thank the audience. I hope this award will help in the development of mountain film, as this genre seems to be entirely forgotten in Poland,” quipped Koszałka.