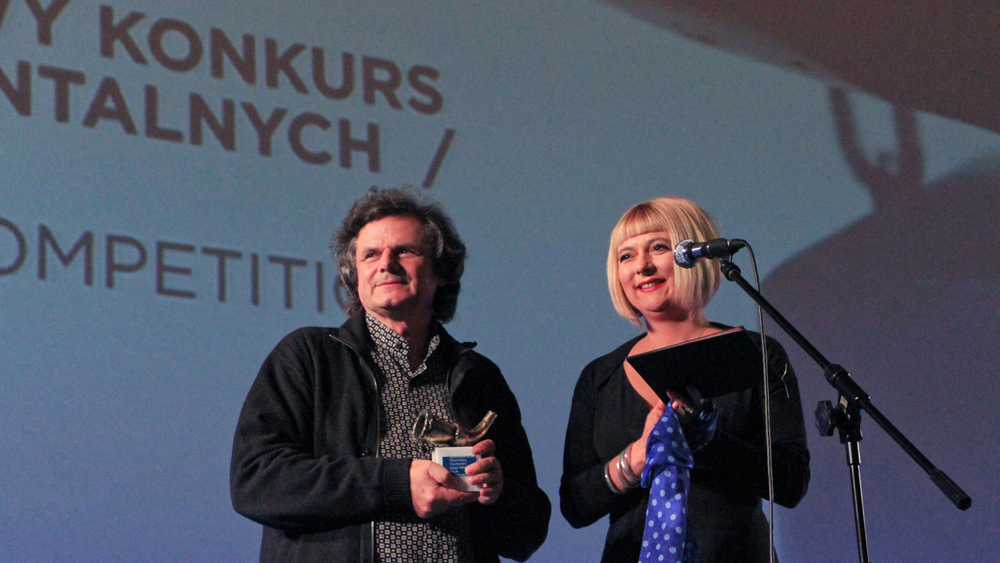 The festival’s closing gala was hosted by Maciej Stuhr. The awards ceremony was preceded by a screening of the last episode of the festival’s daily chronicle. One of the individuals interviewed for this piece was Agnieszka Odorowicz, General Director of the Polish Film Institute. “The value of this festival is much higher than the political and economic circles believe it to be,” said Odorowicz. The chronicle also featured information about the Docs to go! meeting organized by the Polish Film Institute and about the Krakow Film Foundation.

Agnieszka Odorowicz, General Director of the Polish Film Institute, presented the award for Best Film to director Peter Gerdehag together with Jacek Bławut, chairman of the international documentary competition. Gerdehag, director of Women with Cows, accepted the Golden Horn Award together with his editor Tell Aulin. Gerdehag spoke about what happened later to the protagonists of his film, and thanked his crew and his family. He asked the Krakow audience to pose for a group photo to honour one of thee protagonists of his film. The international jury (chairman Jacek Bławut, Luciano Barisone, Hedva Goldschmidt, Truls Lie, and Peter Torbiörnsson) honoured the film for depicting “the spirit of love and will of the protagonist, who celebrates life and lives in harmony with nature”.

The jury of the Polish competition of the 52nd Krakow Film Festival (chairman Michał Kwieciński, Marcin Giżycki, Magnus von Horn, Tomek Sikora, and Tomasz Wolski) awarded five out of the screened 46 films. “In documentary filmmaking, […] the most important factor is empathy of the filmmakers towards the characters they create,” said the jury chairman when summarizing the verdict.

The Golden Hobby-Horse award for the director of the best film in the festival’s Polish competition went to Lidia Duda for her film Uwikłani (Entangled), “for taking up a difficult subject and finding the appropriate form for it”. The award was presented by Magdalena Sroka, deputy mayor of Krakow. “I would like to thank everyone who helped us to make this film a reality,” said Lidia Duda in her acceptance speech.

The jury of the international short film competition (chairman Marcel Łoziński, Oxana Cherkasova, Alessandro Marcionni, Torene Svitil, and Kaveh Tehrani) granted the Golden Dragon Award to Alex Lora, director of Oddyseus’ Gambit. Lora was recognized for “showing the problem of the Third World in all its complexity”. Special mention in the International Short Film Competition went to Polish director Adam Palenta for his documentary Życie stylem dowolnym (Freestyle Life). Palenta was recognized “for his sensitivity and respect for the protagonists and in dealing with such a delicate subject.”

The award of the Polish Society of Cinematographers for best cinematography in a documentary film went to Wojciech Staroń, director of photography in Lidia Duda’s Uwikłani (Entangled). When presenting the award, cinematographer Piotr Wojtowicz said: “Placing a mirror in front of reality is not enough. It is important to know how to place that mirror. The same applies to a film camera, and its being placed together by the film’s director and cinematographer. The way reality is reflected in this mirror or camera […] is a test to the skills of the filmmakers.” The jury statement read that Staroń was awarded for depicting “the two protagonists […] stuck in their obsessions while wandering through the labyrinth of human passions.”

Wojciech Staroń also received the Award of the President of TVP S.A. (Polish Television) for best cinematography. “I hope that the camera can be more than a mirror, that it can become a magnifying glass that receives and releases the energy which we draw from reality,” said Staroń in his acceptance speech, adding that this was the first time he ever worked on a documentary where he could not film the faces of the protagonists, which was a real challenge.

Maciej Szumowski Award for “My Notes from the Underground”

The Maciej Szumowski Award for remarkable social awareness, founded by the National Broadcasting Council (KRRiT), went to director Jacek Petrycki, author of the documentary Moje zapiski z podziemia (My Notes from the Underground). The award was presented by Sławomir Rogowski, member of the National Broadcasting Council. “There are a few people present in this room who know me as someone who fought for 35mm film as the world’s best medium, one which should be cherished and fought for to the death. I find it remarkable and touching to receive this award for a film made using VHS footage,” said Petrycki. Moje zapiski z podziemia (My Notes from the Underground) was co-financed by the Polish Film Institute.

At the festival’s closing gala, Agnieszka Odorowicz, General Director of the Polish Film Institute, thanked the festival team for another “wonderful edition of this unique celebration of world cinema” and invited audiences to participate in next year’s edition of the Krakow Film Festival.